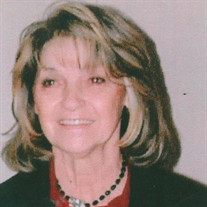 On the evening of July 29, 2016, Maxine “Mammy” Griffith Miller departed her earthly life while being comforted by her children, grandchildren and the wonderful staff of Mountain Hospice. Maxine was affectionately known as “Mammy” because of her big heart and love for children. No one has embraced life as fully and as joyfully as Mammy. She was one of the best mothers and Christians in the world. She held God and her family tightly in her heart. Mammy had bravely been fighting Parkinson ’s disease. Her devotion to her family and her firm belief in God helped to support her struggle and gave her peace. Mammy had a compassion for taking care of others. Mammy was born July 23, 1943 to the late Lester and Ora Etta Watson Griffith. On July 23, 1960, she married William “Jerry” Miller who survives in Jimtown. She was blessed with eight siblings, including Charles Franklin Griffith and wife Nan of Dothan, AL., Gary Lee Griffith and wife Jeannie, Evans, WV and Evelyn “Sissy” Nelson and husband Mark, NC. Siblings who preceded her in death are Geneva E. Griffith Hines, Lester L. Griffith, Paul “Romie” Griffith, Roger Dale Griffith and James Bennett. Also surviving are several brothers and sisters in law including Carris Griffith, Elkins, Dorothy Bennett, NC, Shirley Miller, Junior, WV, JoAnn and Tom Bright, Elkins and Howard Miller of Jimtown. Mammy is also survived by her children, Terry L Yeager and husband David, Jimtown, William “Bill” Miller and wife Rebecca, Jimtown, Kimberly D. Skinner and husband Doug, Jimtown, Shawn P. Miller and wife Melissa, Meadowville, WV, DeWayne Kirkpatrick and wife Amy, Buckhannon, WV, Logan Nathanial Ryan Miller and Alexyonna Miller of Jimtown, and grandchildren, Heather N. Reesman and husband Craig, Amanda J. Howell and husband Sonny, Andrew D. Yeager and wife Ashley, Madison B. Silcox and husband Ronnie, Manda S. Yeager, Nick W. Yeager, William “Michael” Miller and wife Tracy, Trae, Tia and Trevor Skinner, Destiny and Jerrica Yeager, Zachary, Micah, and Mackenzie Miller, Aubree Kirkpatrick and a special grandson in Heaven, William Glen Yeager. Great grandchildren include Maddox, Elijah, Griffin, and Halle Reesman, Brooklynn and Blake Howell, Harrison Silcox, Alyssa and Alivia Yeager, Ella Grace Skinner, Ashton and Jada Charles and Michael “Jace” Miller. Mammy attended the schools of Randolph County and had been employed by Reidbord Brothers in Elkins. She also owned a Personal Care Home in which she impacted several lives. Mammy was a member of the Elkins Church of God and Family Worship Center where she was involved in youth ministry for several years. Later, she became an usher and enjoyed participating in the Young at Heart Services. She was also a member of the Grace my Faith Ministry for the Way of Holiness Church in Buckhannon, WV. Mammy loved to spoil her grandchildren and going on trips with her friends from church. Mammy was a talented decorator and enjoyed painting and making flower arrangements. She had a special place in her heart for her wonderful Mountain Hospice Care Givers: Lisa, Alecia, Melissa, Jessica, Feronda, Debbie, Stephanie, Nicole, Don and Mary. Her family would like to pay special thanks to Mountain Hospice for their extraordinary services. Friends may call from 5:00 pm until 8:00 pm Monday, August 1, 2016 at the Tomblyn Funeral Home in Elkins. On Tuesday, August 2nd, she will be moved to the Elkins Church of God and Family Worship Center for visitation from 2:00 pm until 3:00 pm the funeral hour with Rev. Wayne Aaron, Rev. Eli Hostetler and Rev. Bryan Headley will officiate. Interment will follow in the Phillips Cemetery at Jimtown. Memorial contributions may be made to Mountain Hospice, 1600 Crim Avenue, Belington, WV 26250 in memory of Mammy. The Tomblyn Funeral Home of Elkins is in charge of the arrangements for Maxine “Mammy” Griffith Miller. Condolences may be expressed to the family at www.tomblynfuneralhome.com.

On the evening of July 29, 2016, Maxine &#8220;Mammy&#8221; Griffith Miller departed her earthly life while being comforted by her children, grandchildren and the wonderful staff of Mountain Hospice. Maxine was affectionately known as &#8220;Mammy&#8221;... View Obituary & Service Information

The family of Maxine Miller created this Life Tributes page to make it easy to share your memories.