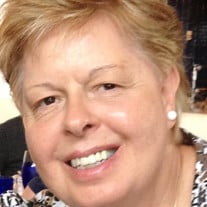 Nancy Dianne Elza Weese, age 69 years, of Elkins, was called home by her Lord and Savior Jesus Christ on April 26, 2019. She was in good health and her death was unexpected. She was born on March 5, 1950, at Elkins, a daughter of the late Earl Leslie Elza, Sr. and Nellie Mae Hedrick Elza. On July 5, 1969, she was married to Edward Nelson Weese, who survives. They were soon to be married for 50 years. In addition to her husband, Nancy is survived by her daughters, Lisa Dianne Weese Moudry, and husband, Dr. Brian W. Moudry, of Elkins, and Heather Michelle Weese, of Elkins. She is also survived by her pride and joy, her only grandchild, Olivia Nicole Moudry. She is survived by her brother, Robert “Bobby” Elza and his wife, Karen, of Elkins, her sister, Patricia Linger, of Martinsburg, her brother-in-law, Stanley Weese, and wife, Marcella, of Gallatin, Tennessee, her sister-in-law, Debbie Weese of Gallatin, Tennessee, her sister-in-law, Madonna Weese of Urbana, Illinois, and her sister-in-law, Sharon Elza of Elkins. She is also survived by her beloved nieces and nephews, Danny Linger and wife, Bernice, of Norton, Kenny Linger and wife Chantra, of Hampton, Virginia, Tricia Linger of Martinsburg, Barbara Elza of Baltimore, Maryland, Susan Howell and husband, John, of Elkins, Chad Elza and wife, Angie, of Morgantown, Tracy Collins and husband, Brett, of Morgantown, Daniel Weese, and wife, Vaishali, of Nashville, Tennessee, and Brandy Weese of Chattanooga, Tennessee. She was also survived by several great-nieces and great-nephews. She was survived by a multitude of close friends she regarded as family as everyone loved and enjoyed her company. If you were a friend to Nancy, you were considered a part of her family. In addition to her parents, Nancy was preceded in death by her infant brother, William Elza, her brother, Earl Leslie Elza, Jr., her brother-in-law, Richard Linger, and her brother-in-law, Kenny Weese. Nancy was a graduate of the Class of 1968 of Elkins High School. She was employed as a type set operator at the Elkins Inter-Mountain, in the billing department at Davis Memorial Hospital, and as a receptionist for Dr. Richard Piccirillo. Beginning in 1988 and continuing until her death, she helped her husband, Eddie, run their family business, Ed Weese Electric. Nancy was a member of the First Church of Christ of Elkins. She enjoyed shopping and spending time with her granddaughter, Olivia, and frequently combined the two activities together. She was a loving wife, mother, grandmother, sister, and friend and she will be missed. Spread your wings and fly! Welcome Home, Nancy! We will be together in Paradise some day! Friends and family may call from 5:00 pm until 8:00 pm Tuesday, April 30, 2019 at the Tomblyn Funeral Home of Elkins. Her funeral will be held at 11:00 am Wednesday, May 1, 2019 at the First Church of Christ of Elkins with Pastor Jason Brandon officiating. Interment will follow at Mountain State Memorial Gardens at Gilman. In lieu of flowers, monetary gifts can be made in her memory to Mountain Hospice, 1002 Crim Ave., Belington, WV 26250.The Tomblyn Funeral Home of Elkins is in charge of the arrangements for Nancy Dianne Elza Weese. Condolences may be expressed to the family at www.tomblynfuneralhome.com.

Nancy Dianne Elza Weese, age 69 years, of Elkins, was called home by her Lord and Savior Jesus Christ on April 26, 2019. She was in good health and her death was unexpected. She was born on March 5, 1950, at Elkins, a daughter of the late Earl... View Obituary & Service Information

The family of Nancy D. Weese created this Life Tributes page to make it easy to share your memories.