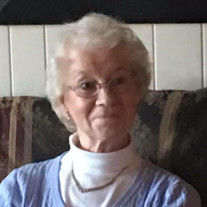 Naomi Ruth Poling Hinchman Zirkle, age 82 years, a resident of Elkins, passed away Friday, December 28, 2018 in the Davis Medical Center. She was born May 18, 1936 at Philippi, WV, a daughter to the late Willard and Lena Mouser Poling. She was one of seven children. She was twice married, first to Ernest Oney “Bud” Hinchman for thirty six years who preceded her in death in 1994. Then in 2001, she was married for twelve years to Gerald Zirkle who preceded her in death in 2013. Surviving is her immediate family, her only child, daughter Carol Losh of Elkins, granddaughter, Angela Wills of Fairmont, WV and great grandson, Brody. Grandson, John Losh and wife Heather and great granddaughter, Emelia of Fairmont, WV. Granddaughter, Lindsey Stell and husband Zachary of Elkins. Also surviving are her sisters, Marie Knight of Philippi, Janet Wilson and husband Gayle of Bayard, WV and Wanda Jack and husband Edward of Philippi. Also preceding her in death was one sister, Pauline McQueeny and brothers, Robert and Ray Poling. Naomi was a Christian by faith and attended Sand Run Baptist Church at Buckhannon, WV. She loved bowling, going on trips with the Senior Center and had made many friends through these fun times. She will be missed by her extended family members and friends. A special thank you goes to her loved ones through all their care and support, along with her minister Donald Butcher. She will be kept in dearest of memories and missed by all who cared. Friends may call from 6:00 pm until 8:00 pm Sunday, December 30, 2018 at the Tomblyn Funeral Home in Elkins. A funeral service will be held at 11:00 am Monday, December 31st, with Rev. Donald Butcher officiating. Interment will follow in the American Legion's Little Arlington Cemetery at Cravensdale. The Tomblyn Funeral Home of Elkins is in charge of the arrangements for Naomi Ruth Poling Hinchman Zirkle. Condolences may be expressed to the family at www.tomblynfuneralhome.com.

Naomi Ruth Poling Hinchman Zirkle, age 82 years, a resident of Elkins, passed away Friday, December 28, 2018 in the Davis Medical Center. She was born May 18, 1936 at Philippi, WV, a daughter to the late Willard and Lena Mouser Poling. She... View Obituary & Service Information

The family of Naomi Ruth Poling Hinchman Zirkle created this Life Tributes page to make it easy to share your memories.