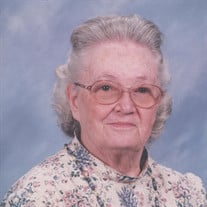 Norma P. Daetwyler Moore Stalnaker, age 94, formerly of Elkins, WV passed away on February 18, 2020 at Sundale Rehabilitation and Long Term Care in Morgantown, WV. Norma was born on January 5, 1926 in Helvetia WV, the oldest child of Paul Daetwyler and Anna Zumbach Daetwyler. Norma’s father and mother were first and second generation Americans whose parents and grandparents immigrated to America from Switzerland and Germany. In addition to her parents, Norma was preceded in death by her siblings, Richard E. Daetwyler, Bernadine Daetwyler Kelley, Bernice Daetwyler Lively, Ruby Daetwyler Thomas, and W. Dale Daetwyler. She was the last surviving member of her immediate family. A 1944 graduate of Pickens High School, Norma received a Bachelor of Science Degree in math from Davis & Elkins College in 1948. On June 4, 1949 she was united in marriage to Harrison H. Moore, who preceded her in death in 1991. They were longtime residents of Findley Street. Norma taught in the Randolph County School system at Pickens School, Harman School, and Elkins Junior High School. She served as a den mother for Cub Scout Pack 88, was active in 4-H, and was a founding member of the Echo 4-H Club. Norma volunteered with the Davis Memorial Hospital Auxiliary and Colonial Place. She was a past president of the Board of Directors for Helping Hand Clearinghouse and the coordinator of the Good Shepherd Ministries clothing center and food pantry. She was a trained Internal Revenue Service volunteer for the Randolph County Senior Center where she prepared tax returns, free of charge, for senior citizens for over 20 years. A faithful member of the First United Methodist Church of Elkins, she served as a Sunday School teacher, a hostess, and was a long time member of the Chancel Choir and Circle 5. She held many offices in the United Methodist Women, Highland Parrish Council, Tyrand Parrish, and Church Women United. She was a delegate to the state conference of the United Methodist Church, and a member of Alpha Delta Kappa sorority. In 1996, she received the Elkins - Randolph County Chamber of Commerce Service Person of the Year Award. Norma is survived by her son, Paul Moore and wife Linda Richards Moore of Morgantown WV; her daughter Helen Moore and husband William Moore of Wilmington DE, with whom she made her home for the past 3 years; her grandchildren, Stephanie Miller and husband Robert Miller of Pittsburgh PA; Becky Moore, also of Pittsburgh; Dr. James Moore of Elkins; and sisters-in-law Edith Daetwyler of Mineral Bluff, GA and Anna Grace Daetwyler of La Plata, MD. Also surviving are 25 nieces and nephews, many of whom lovingly referred to their Aunt Norma as “the little general”. The family would like to extend their sincere gratitude to everyone at Sundale, most especially the staff of the palliative care unit, for their loving care and the kindnesses they showed Norma during her time there. “Truly I tell you, whatever you did for one of the least of these brothers and sisters of mine, you did for me.” Matthew 25:40. Friends may call from 6:00 pm until 8:00 pm Wednesday, February 26, 2020 at the Tomblyn Funeral Home in Elkins. A funeral service will be held at 11:00 am Thursday, February 27th from the First United Methodist Church with Rev. Brian Seders officiating. Entombment will follow at the Mountain State Memorial Gardens Mausoleum. Memorial contributions may be made to the First United Methodist Church, 315 Kerens Avenue, Elkins, WV 26241 or to Our Clubhouse, Breast Cancer Support Group, 2816 Smallman Street, Pittsburgh, PA 15222 in memory of Norma. The Tomblyn Funeral Home of Elkins is in charge of the arrangements for Norma P. Daetwyler Moore Stalnaker. Condolences may be expressed to the family at www.tomblynfuneralhome.com.

The family of Norma Moore Stalnaker created this Life Tributes page to make it easy to share your memories.