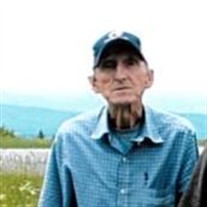 Norman J. “Babe” Arbogast, age 83 years, a resident of Harman, passed away Tuesday, July 31, 2018 at Cortland Acres Nursing Home in Thomas, WV. He was born December 19, 1934 at Pendleton County, the son of the late Lynn and Merlie Vance Arbogast. On December 4, 1954 at Harman, he was married to Nettie Long who preceded him in death March 6, 2009. He is survived by three sons, Mick Arbogast and wife Sandy of Harman, Mike Arbogast and wife Elenore of Harman and Tim Arbogast and wife Rosie of Petersburg. Two daughters, Nicole Dolly and husband Robert of Harman and Tammy McFarland and husband Donnie of Harman. One brother, Charles Arbogast of Ohio and ten grandchildren including Derrick Nelson who they raised, three step grandchildren, thirteen great-grandchildren and two step great-grandchildren and one great-great granddaughter. Also preceding him in death were one daughter, Robin Arbogast, one brother, Lester Arbogast, three sisters, Ethel “Sis” Mowery, Virgie Grogg and Shirley Nelson and one grandson, Michael. Norman was a Veteran of the United States Army and had retired from Davis Medical Center Maintenance Department. He loved to hunt and play with his grandchildren and was a member of the Church of God. Friends may call from 5:00 pm until 7:00 pm Saturday, August 4, 2018 at the Tomblyn Funeral Home in Elkins. On Sunday, August 5th, Mr. Arbogast will be moved to the Whitmer Church of God for visitation from 1:00 pm until 2:00 pm. A funeral service will be held at 2:00 pm Sunday from the church with Pastor Steve Bailey officiating. Interment will follow in the Laurel Hill Cemetery near Whitmer. The Tomblyn Funeral Home of Elkins is in charge of the arrangements for Norman J. “Babe” Arbogast. Condolences may be expressed to the family at www.tomblynfuneralhome.com.

The family of Norman Jacob Arbogast created this Life Tributes page to make it easy to share your memories.