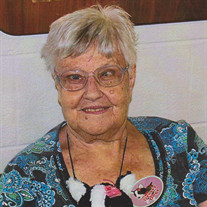 Ocie Mae Hedrick Rosier, age 81 years, a resident of Elkins, passed away at 8:07 P.M. Monday, October 3, 2016. She was born August 29, 1935 at Durbin, WV, a daughter of the late Frank Alexander Hedrick and Georgia Myrtle Persinger Hedrick. She was twice married, formerly to James Donald White. In 1973 she was married to Elmer Duston Rosier who preceded her in death in May of 1977. Surviving are two sons, Donald White and Bret White both of Elkins and three daughters, Bertha Ann White of Elkins, Donna Martin, Rockingham, NC and Mary Jo White of North Carolina. One brother, William Lloyd Hedrick of Elkins and five grandchildren also survive. Also preceding her in death were two brothers, Dave Hedrick and Roscoe Hedrick, two half-brothers, Grover Persinger and James Vandevender and four sisters, Kaythern Hedrick, Ruth Hedrick, Ella Collins and Francis Bennett. Ocie was a homemaker, a member of the Randolph County Senior Center, a Pentecostal by Faith and attended the Gospel Light Tabernacle. Friends may call from 6:00 pm until 8:00 pm Thursday, October 6, 2016 at the Tomblyn Funeral Home in Elkins. A funeral service will be held at 10:00 am Friday, October 7th from the funeral home chapel with Rev. A. H. Belt and Pastor David Collins officiating. Interment will follow in the Elkins Memorial Gardens. Memorial contributions may be made to the Randolph County Senior Center, 5th Street and Railroad Ave., Elkins, WV 26241 in memory of Mrs. Rosier. The Tomblyn Funeral Home of Elkins is in charge of the arrangements for Ocie Mae Hedrick Rosier. Condolences may be expressed to the family at www.tomblynfuneralhome.com.

The family of Ocie Mae Rosier created this Life Tributes page to make it easy to share your memories.