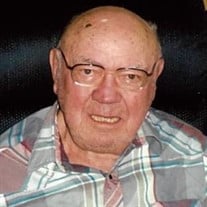 Otha Carl Pennington, age 97 years, a resident of Elkins, went home to be with the Lord Thursday afternoon, January 23, 2020 surrounded by his loving family at his home. He was born April 12, 1922 at Circleville, WV a son of the late Ora James and Ervil Martha Simmons Pennington. On October 17, 1949, in Maryland, he was married to Elizabeth Katherine Caplinger, who survives. Also surviving are three daughters, Dottie Price and husband Denny of Elkins, Diane Pennington of Manassas, VA and Sherri Wheeler and husband David of Elkins. One brother, Leo Pennington of Milledgeville, GA, three grandchildren, Elizabeth McLean and husband Bryce of Colorado Springs, CO, Christina Pereira of Bristow, VA, Jaron Wheeler and fiancé’ Bailey Rummel of Glen Allen, VA and nine great grandchildren. He is also survived by two step grandchildren, Andy Price and wife Lacey of Catlin, IL and Heather Yerem and husband Jimmy of Catlin, IL and six step great-grandchildren. Several nieces and nephews also survive. Also preceding him in death were two brothers, Stanley and Jim Pennington. Mr. Pennington was a 1939 graduate of Circleville High School. He was a Veteran of the United States Army having served during World War II. After his military service, he drove truck for O.H. Taylor until the company became Woodford Oil Company. He drove for Woodford Oil Company for over 30 years until his retirement. Mr. Pennington was a member of Otterbein United Methodist Church of Elkins. Friends may call from 10:00 am until 12:00 noon Monday, January 27th, 2020 at the Tomblyn Funeral Home in Elkins. A funeral service will be held at 12:00 pm Monday from the funeral home chapel with Pastor Julie Davis officiating. Interment will follow at the Brick Church Cemetery in Huttonsville. In lieu of flowers, the family suggests that memorial contributions may be made to the Otterbein United Methodist Church, 1100 South Davis Avenue, Elkins, WV 26241 in memory of Otha. The Tomblyn Funeral Home of Elkins is in charge of the arrangements for Otha Carl Pennington. Condolences may be expressed to the family at www.tomblynfuneralhome.com.

Otha Carl Pennington, age 97 years, a resident of Elkins, went home to be with the Lord Thursday afternoon, January 23, 2020 surrounded by his loving family at his home. He was born April 12, 1922 at Circleville, WV a son of the late Ora James... View Obituary & Service Information

The family of Otha Carl Pennington created this Life Tributes page to make it easy to share your memories.