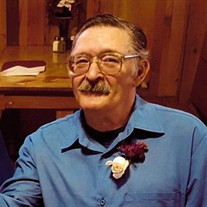 Otis “Bill” Pennington, Jr., age 71 years, a resident of Seneca Rocks, WV, passed away at his home on Wednesday, March 20, 2019. He was born April 23, 1947 at Elkton, VA, a son the late Otis D. Pennington, Sr., and the late Edith Hedrick. He was married to Bernadette Arbough Pennington who survives at Seneca Rocks. Also surviving is one son, Michael W. Pennington and wife Jessica of Beverly, one brother, Roger Hedrick and wife Linda of East Dailey and one sister, Anna Ruth Wynn of Bevins, TX. Also surviving are three grandchildren, Hailey, Katie and Presley. Also preceding him in death were three brothers, Richard Pennington, Thurman Hedrick and Wayne Hedrick, one sister, Rosalee Thompson and a granddaughter, Emmalee. Bill worked as a Foreman with Asplundh Tree Trimming prior to becoming disabled. He loved camping, fishing, hunting, digging ramps and finding mushrooms. He was a member of the Job Church of God. Friends may call from 10:30 am until 12:00 pm Monday, March 25, 2019 at the Job Church of God. A funeral service will be held at 12:00 pm Monday from the church with Pastor Todd Rhodes officiating. Interment will follow in the South Branch Memorial Gardens at Petersburg, WV. The Tomblyn Funeral Home of Elkins is in charge of the arrangements for Otis “Bill” Pennington, Jr. Condolences may be expressed to the family at www.tomblynfuneralhome.com.

The family of Otis "Bill" Pennington Jr. created this Life Tributes page to make it easy to share your memories.