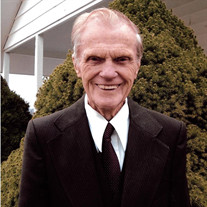 Pastor Robert Lee Keith Toms, age 97 years, a resident of Elkins, passed away Friday, August 3, 2018 at his home. He was born February 16, 1921 at Smithsburg, MD, a son of the late Albertus and Sadie Huyett Toms. He was thrice married, first to Rose Catanese Toms in 1952 who preceded him in death. In 1992, he was married to Emma Virginia Kinzer Jacko who preceded him in death December 6, 2004. On November 22, 2008, he was married to Felicitas “Fely” Deles Toms who survives. Also surviving is one son, Robert Lee Toms and wife Geraldine of Chatham, Ontario, Canada. Step children, Ray Jacko of Elkins; Don Jacko and wife Cheryl of Elkins; Kenneth Jo Deles and wife Romhelyn of Johannesburg, South Africa; Lusylen Deles Labalan and husband Lemuel of the United Kingdom; Constela Mae Catolico-Mancilla and husband Pablo of Toronto, Canada and Racelle Deles of the Philippines, sixteen grandchildren, eleven great grandchildren, several nieces, nephews and cousins also survive. Also preceding him in death were two brothers, Harold and Stephen Toms and one sister, Ruth Toms Gesler. Pastor Toms had worked as a school teacher and was ordained a Pastor on July 4, 1964. He had worked as a District Church Pastor for the Seventh-day Adventist Church in Delaware, New Jersey, North Dakota, Ontario, and of Quebec, Canada. He had worked for several years at the Seventh-day Adventist Church in Elkins as a church school teacher and had retired as Minister of the Gospel. He was a member of the Seventh-day Adventist Church of Buckhannon. He liked to read the bible and memorize chapters of the bible. His hobbies were playing the guitar, harmonica and the Japanese harp. Friends may call from 6:00 pm until 8:00 pm Wednesday, August 8, 2018 at the Tomblyn Funeral Home in Elkins. A funeral service will be held at 11:00 am Thursday, August 9th from the funeral home with Pastor Rick Cutright officiating. Interment will follow in the Elkins Memorial Gardens with Pastor Randy Murphy presiding at the gravesite. Pastor Toms had been a great supporter of Christian Education and the family suggests expressions of sympathy may be made in the form of contributions to the Highland Adventist School, 777 Kennedy Street, Elkins, WV 26241 in memory of Pastor Toms. The Tomblyn Funeral Home of Elkins is in charge of the arrangements for Pastor Robert Lee Keith Toms. Condolences may be expressed to the family at www.tomblynfuneralhome.com.

Pastor Robert Lee Keith Toms, age 97 years, a resident of Elkins, passed away Friday, August 3, 2018 at his home. He was born February 16, 1921 at Smithsburg, MD, a son of the late Albertus and Sadie Huyett Toms. He was thrice married, first... View Obituary & Service Information

The family of Pastor Robert Lee Keith Toms created this Life Tributes page to make it easy to share your memories.