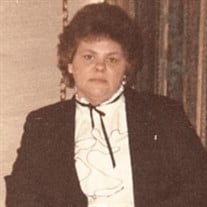 Patricia Anne Johnson Simmons, age 74 years, a resident of Elkins, went home to be with the Lord on Sunday, September 6, 2020 at her home under the care of West Virginia Caring Hospice. She was born September 1, 1946 at home in Hendricks, WV a daughter of the late Donald Johnson and Milda Elizabeth Flynn Johnson. Surviving are two sons, Michael Johnson and William Jackson Simmons, Jr. both of Elkins. Also surviving are three granddaughters, Heather Simmons, Natosha Conrad and Kayla Simmons; two grandsons, Michael Johnson and Matthew Johnson; eight great grandchildren; two sisters, Charlotte Corley and husband Mike of Elkins and Roxanna Watson and Ricky of Junior, WV. One brother, Donald Johnson and wife Mary of Elkins and several nieces and nephews also survive. Also preceding her in death were one brother, Jeffery Allen Johnson, one sister, Sharon Lynn Johnson Simmons and a special niece, Sonya Lynn New. Patricia has been in declining health for several years and her death was attributed to cancer. She was a Pentecostal by Faith, attended the Elkins Church of God and Family Worship Center, and enjoyed gospel music and watching church ministries on television. Her joy was her grandchildren and great grandchildren. Special thanks are extended to Jo Lynn Simmons and Sue Johnson and best friends, Dorothy and Bill Harlen and Wilma Spencer. Friends may call from 10:00 am until 12:00 pm Thursday, September 10, 2020 at the Tomblyn Funeral Home in Elkins. A funeral service will be held at 12:00 pm Thursday from the funeral home chapel with Pastor John Taylor officiating. Interment will follow in the Mountain State Memorial Gardens near Gilman. As we continue to follow the mandate of Gov. Jim Justice and the guidelines established by the Center for Disease Control, masks and social distancing will be required for anyone attending the services for Patricia. The Tomblyn Funeral Home of Elkins is in charge of the arrangements for Patricia Anne Johnson Simmons. Condolences may be expressed to the family at www.tomblynfuneralhome.com.

Patricia Anne Johnson Simmons, age 74 years, a resident of Elkins, went home to be with the Lord on Sunday, September 6, 2020 at her home under the care of West Virginia Caring Hospice. She was born September 1, 1946 at home in Hendricks, WV... View Obituary & Service Information

The family of Patricia Anne Simmons created this Life Tributes page to make it easy to share your memories.