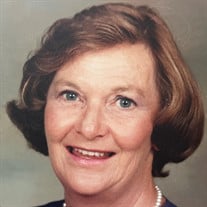 Patsy Gladwell Phares of Elkins died on April 14, 2022, at Davis Medical Center after a brief illness. She was born in Valley Bend, WV on June 9, 1931, the daughter of Rexell Ford Gladwell and Janet Chandler Gladwell. Two younger sisters, Paula Gladwell Motter and Billie Ann Gladwell Edwards preceded her in death. Pat, as her family and friends called her, grew up in Valley Bend and graduated from Elkins High School in 1949. She married the late Emerson Phares on September 8, 1950 and they resided in Elkins for a year before moving to Washington Court House, OH, where Emerson formed a wholesale lumber company. In 1963 the couple returned to Elkins to raise their young family. In addition to being a homemaker, Pat involved herself in many local activities and organizations. After returning to Elkins, her family joined Grace Episcopal Church. Pat was a member and of its Altar Guild for 45 years and was generous with her time and efforts on behalf of the church. To commemorate the 100th anniversary of the church’s founding, she commissioned a large needlepoint canvas, which she completed and then presented to the church; the banner today hangs above the church’s choir stalls. She was also responsible for commissioning and needlepointing most of the church’s communion kneeling cushions. Pat’s interests were varied and diverse. When her sons were young, she became a Cub Scout Den Mother, which she really enjoyed. She was an enthusiastic, competitive golfer and belonged to the Elkins Ladies Golf Association for many years and was club champion several times. Her family also loved to ski. She and Emerson frequently joined friends for skiing in Vail, Aspen and Italy. She loved to travel, explore new places, and revisit those she particularly liked, especially if golf was involved. She also volunteered as a driver/runner for Meals on Wheels for over 25 years, stopping only when health problems made it impossible for her to continue. Pat was an artist. She was an exceptionally accomplished knitter, needlewoman, weaver and experienced quilter. She gifted her family, friends and charities with many of her intricate creations. When she was a volunteer for the Davis Memorial Hospital Ladies Auxiliary, she realized the premature babies born in the hospital needed soft washable caps, which were not commercially available at the time. She enlisted the help of fellow knitters and they were able to supply caps to premature newborns for many, many years. For over 25 years, Pat also volunteered as a driver with Meals on Wheels, Pat is survived by two children, Janet L Phares of Staunton, VA, and Rexell R Phares of Elkins. Her son, Emerson Patrick “Chip” Phares preceded her in death. She was also grandmother to: Conor C Phares and Jocelyn J Phares, both of Elkins, Ali Chandler Gleason of Bozeman, MT and Megan Engle Phares of Elkins. Pat’s first great-grandchild, Emerson Jude Miller was born in January. She also leaves many cherished nieces and nephews who loved their “Aunt Pat.” A service of Christian burial is planned for this summer, along with a memorial service celebrating Pat’s long and productive life. Memorial contributions may be made to Grace Episcopal Church, 212 John St., Elkins, WV 26241 or the Elkins Randolph County Public Library, 416 Davis Ave., Elkins, WV 26241in memory of Pat. The Tomblyn Funeral Home of Elkins is in charge of the arrangements for Patsy Gladwell Phares. Condolences may be expressed to the family at www.tomblynfuneralhome.com.

The family of Patsy Gladwell "Pat" Phares created this Life Tributes page to make it easy to share your memories.