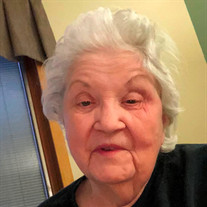 Pauline J. Newlon, age 80 years, a resident of the Parsons Road, Elkins, passed away Monday, August 17, 2020 at the Davis Medical Center. She was born August 29, 1939 at Durbin, WV, a daughter of the late Paul Collett and Helen M. Lockridge Collett. On August 24, 1960 at Oakland MD, she was married to Dale Newlon who survives. She is also survived by three sons; Tim Newlon and wife Ashley, Chris Newlon and Brenda all of Elkins, Chad Newlon and wife Janie of Montrose; five grandchildren, Ashleigh Newlon Watson and husband Tommy of Belington, Beau Newlon and wife Nicole of Montrose, Elliott Newlon of Elkins, Hali Newlon of Montrose, Caroline Newlon of Elkins and Pauline’s great granddaughter Olivia Watson of Belington. Three sisters-In-law, Sharon and Connie Collett and Betty Vanscoy, one brother-in-law, Bill Vanscoy and several nieces and nephews also survive. In addition to her parents, she was preceded in death by two brothers, Kenneth “Kenny” Collett and Gerald “Jerry” Collett. Pauline was a homemaker and secretary at Newlons International Sales until her retirement. She was a member of the Ladies Auxiliary of the Leading Creek Volunteer Fire Department, where she served as treasurer for many years. She was also a member of the Red Hat Society, Pleasant Valley Rebekah Lodge No. 98 of Montrose, the Elkins High School Alumni Association, Creative Homemakers and a bowling league. Pauline loved music and played several musical instruments, most predominantly piano and keyboards. She loved listening to and playing music at local events such as picking in the park. She was a member of the First Baptist Church of Elkins and attended Landmark Baptist Church of Elkins. Pauline’s request for cremation will be honored. A memorial service will be held at a later date. In lieu of flowers the family requests memorial contributions may be made to the Leading Creek Volunteer Fire Department, C/O Scott Kennedy, P. O. Box 158, Kerens, WV 26276 in memory of Pauline. The Tomblyn Funeral Home of Elkins is in charge of the arrangements for Pauline J. Newlon. Condolences may be expressed to the family at www.tomblynfuneral home.com

Pauline J. Newlon, age 80 years, a resident of the Parsons Road, Elkins, passed away Monday, August 17, 2020 at the Davis Medical Center. She was born August 29, 1939 at Durbin, WV, a daughter of the late Paul Collett and Helen M. Lockridge... View Obituary & Service Information

The family of Pauline J. Newlon created this Life Tributes page to make it easy to share your memories.