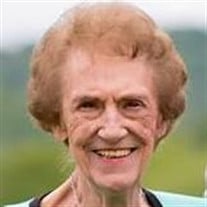 Phyllis Elaine (Yokum) Daniels, age 81 years, departed this life on January 23rd, 2018 in Bridgeport, West Virginia. She was born on March 20th, 1936 in Beverly, West Virginia, daughter of the late Frank Yokum and Virginia Rosencrance Yokum. On July 25th, 1954, she married Dale Harper Daniels, at the Beverly Presbyterian Church and lived her life on a farm, on Files Creek, Beverly, West Virginia. In addition to her parents, she is preceded in death by her husband, Dale and her brother Olan K. Yokum (Colleen Yokum) of Missouri. While she had been in failing health, she was able to enjoy the holidays with her friends and family. Phyllis was a devoted wife and mother and enjoyed doing genealogy, creating pretty flower beds, eating at IHOP and working a good crossword puzzle. She leaves behind three children, Crystal Daniels Carrier (Eddie Carrier) currently of Ona, Kimberly Daniels Davidson (Jonathan Burge) of Bridgeport and Darian H. Daniels of Beverly, West Virginia. She will be greatly missed by ten grandchildren: Sarah Rhodes, Adam Weible, Mary Baker, Samuel Weible, Anna Reynolds, Benjamin Weible, Abigail Weible, Hiram Weible, Isabella Daniels and a step-granddaughter, Lauren Ray. She was a great grandmother to six children: Brody, Rylee, Campbell, Luke, Lilly and Jane. She also leaves behind many wonderful nieces and nephews, as well as amazing friends. She had many special friends, including Doris Riggleman and Nancy Bruffy. Phyllis had been a resident of Brookdale Maplewood, Bridgeport, West Virginia, for the last year and a half. While there, she made many new friends among residents and staff. She attended Beverly United Methodist Church and volunteered many hours at the Elkins West Virginia Family History Center. The family would like to express their appreciation to the wonderful doctors and nurses at the United Hospital Center in Bridgeport, West Virginia. Friends may call from 11:00 am until 1:00 pm Saturday, January 27th, 2018 at the Tomblyn Funeral Home in Elkins. A funeral service will be held at 1:00 pm, Saturday from the funeral home chapel, with Rev. Michael Burge officiating. Interment will follow at Mount Vernon Cemetery, near Beverly, West Virginia. The Tomblyn Funeral Home of Elkins is in charge of the arrangements for Phyllis Elaine (Yokum) Daniels. Condolences may be expressed to the family at www.tomblynfuneralhome.com.

The family of Phyllis Elaine Daniels created this Life Tributes page to make it easy to share your memories.