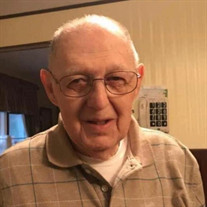 Mr. Richard A. Fretwell, age 85 years, a resident of Elkins and more recently a resident of the Elkins Rehabilitation and Care Center, passed away Thursday, October 8, 2020 at the facility. He was born February 6, 1935 at Kerens, WV a son of the late Carlton and Barbara Marie Barkley Fretwell Trimble. He was a twice married, first to the former Nancy Shoulders. On February 13, 1988 in Elkins he was married to Charolette “Ann” Bowler Fretwell who survives in Elkins. Also surviving are two sons, Jerry Fretwell and wife Susan, Elizabethtown, PA and Mark Fretwell and wife Sherri of Cortland, OH. Two step sons, Joe Stalnaker and wife Julie, Evans, WV and Dan Stalnaker and wife Deborah of Beverly, WV; a step daughter, Tammy Williams of Elkins; one half sister, Susan Engle, Delray Beach, FL; five grandchildren, Candice, Nikolas, Nathaniel, Quentin and Morgan; step grandchildren, Trista, Bryan, Cassie, CeCe, Isaac, Shelby and Rebecca and six great grandchildren also survive. Also preceding him in death was one brother, Raymond M. Fretwell and one step grandson, Trenten Jordan. Richard attended the schools of Randolph County and was a Veteran of the United States Navy where he attained the rank of Senior Chief. He served in Korea, Lebanon and Vietnam prior to his retirement. Richard was later employed by the General Services Administration at the Federal Building in Elkins. He was a member of the Wayside United Methodist Church and attended church anywhere his wife Ann served as pastor. He was a Life Member of Veterans of Foreign Wars Post 3647, H.W. Daniels Post 29 American Legion where he was a former member of the Honor Guard, Fleet Reserve Association, Tin Can Sailors and the Cherry River Navy. Friends may call from 12:00 pm until 2:00 pm Sunday, October 11, 2020 at the Tomblyn Funeral Home in Elkins. A funeral service will be held at 2:00 pm Sunday from the funeral home chapel with Sylvester Fretwell officiating. Masks and social distancing will be required for Mr. Fretwell’s services. Cremation will follow. Inurnment of the cremains will take place in the American Legion’s Little Arlington Cemetery at a later date. The Tomblyn Funeral Home of Elkins is in charge of the arrangements for Richard A. Fretwell. Condolences may be expressed to the family at www.tomblynfuneralhome.com.

Mr. Richard A. Fretwell, age 85 years, a resident of Elkins and more recently a resident of the Elkins Rehabilitation and Care Center, passed away Thursday, October 8, 2020 at the facility. He was born February 6, 1935 at Kerens, WV a son of... View Obituary & Service Information

The family of Richard A. Fretwell created this Life Tributes page to make it easy to share your memories.