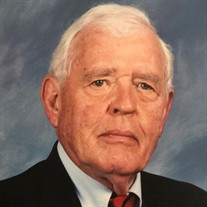 Richard Howe (Dick) Talbott, Jr., age 88, passed away on April 11, 2019 in Roanoke, VA. He was born on August 6, 1930 in Clarksburg, WV, the son of Richard H. Talbott and Beulah (Bid) Saffel. Dick received his Bachelor of Arts degree in politics from Princeton University in 1952, where he played lightweight (150 pound) football and was a member of the Tiger Inn social club. In August of 1954 he married his wife of nearly 65 years, Jo Ann Smith. As a law student at the West Virginia University College of Law (1952-1955), Dick was elected president of his class, Associate Editor of the Law Review, and a member of Phi Kappa Psi fraternity. Upon his graduation with a Doctorate of Juris Prudence in 1955, Dick served in the U.S. Army Counter Intelligence Corps at Fort Meade, MD (1955-1957). He began his law practice in 1957 with the Hyer, Gibson, and Talbott law firm in Elkins. In 1968 he moved his family to Fairmont, WV where he served as manager of legal services for Monongahela Power Company. Returning to Elkins in 1979, Dick joined the law firm of Brown, Harner, and Busch, which later became Busch and Talbott. He retired in 2004, having been honored for 50 years of service to the WV state bar. In addition to the practice of law, Dick served on advisory committees to the U. S. District Court for the Northern District of WV and was a member of the West Virginia State Bar Association, including its board of governors, and the West Virginia Real Estate Lawyers Association. He served as Mental Hygiene Commissioner, Fiduciary Commissioner, and Ballot Commissioner in Randolph County. Dick was a member of the board of directors of Davis Trust Company, board of trustees of Davis and Elkins College, and board of directors of the Mountain State Forest Festival and the Elkins-Randolph County YMCA. He served as Exalted Ruler of the BPO Elks #1135 and was an elder in the Davis Memorial Presbyterian and First Presbyterian Churches in Elkins and Fairmont. Dick was an avid woodworker who made clocks, jelly cupboards, children’s toys, blanket chests, cabinets, and dollhouses. One of his grandfather clocks is on display at Graceland Inn, and he donated a dollhouse with furniture that he had made to the United Way of Elkins. He and Jo Ann enjoyed many happy years of travel in Europe upon his retirement. Surviving are his devoted wife Jo Ann, three children, nine grandchildren, and two great grandchildren. Survivors include Anne Jessie (Doug), Elizabeth (Betsy) Talbott May (Brian) and Stephen (Steve) Talbott (Debby). Grandchildren include Morgan Delaney Morris (Jeff), Mary Ellyson Delaney (Robert Grovich), Martha Delaney, Richard Talbott (Tina), Christopher Talbott (Carrie), Brian Talbott, William May, Catherine Kelly May, and Robert Talbott May. Also surviving are great grandchildren Delaney Morris and Martin Morris. Dick is survived by his sister, Molly Talbott Busch, brother-in-law Harlin Smith (Judy), and several nieces and nephews. The Talbott family will receive friends from 4:00 pm until 6:00 pm Friday, May 31, 2019 at the Davis Memorial Presbyterian Church. A Memorial Service will be held at 12:00 pm Saturday, June 1, 2019 at the church with Rev. Dr. Peter Vial officiating. In lieu of flowers, contributions may be made to the Davis Memorial Presbyterian Church, 450 Randolph Ave., Elkins, WV 26241 or Davis and Elkins College, 100 Campus Drive, Elkins, WV 26241 in memory of Mr. Talbott. The Tomblyn Funeral Home of Elkins is in charge of the arrangements for Richard Howe (Dick) Talbott, Jr. Condolences may be expressed to the family at www.tomblynfuneralhome.com.

The family of Richard Howe (Dick) Talbott Jr. created this Life Tributes page to make it easy to share your memories.