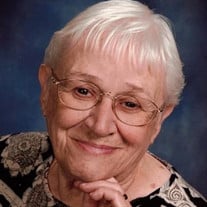 Rita Jean Cederberg, age 84 years, a resident of Elkins, passed away Saturday, March 10, 2018 at Colonial Place. She was born May 14, 1933 in Lancaster, PA a daughter of the late Carl Eshelman “Pete” Peters and the late Mary Lloyd Peters. On June 15, 1963 at Columbia, PA she was married to David Eugene Cederberg who preceded her in death July 11, 2010. Surviving are two daughters, Heather Carpenter, Las Vegas, NV and Hillary Shryock of Elkins. One brother, Carl L. “Bud” Peters, Dandridge, TN; one sister, Nancy Gipe, York, PA and two grandchildren, Richard and Rachel Shryock also survive. Also preceding her in death was one sister, Ruth Hilt. Mrs. Cederberg was a retired Educator of thirty eight years having taught High School English in the Oxford Area School District in Pennsylvania prior to her retirement. She attended the Oxford Presbyterian Church at Oxford, PA. After moving to Elkins in 2004, she attended the Davis Memorial Presbyterian Church. Mrs. Cederberg’s request for cremation has been honored. A memorial service will be held at 3:00 pm Sunday, April 15, 2018 at the Davis Memorial Presbyterian Church with Rev. Dr. Peter A. Vial officiating. Memorial contributions may be made to the Randolph County Humane Society, PO Box 785, Elkins, WV 26241 in memory of Mrs. Cederberg. The Tomblyn Funeral Home of Elkins is in charge of the arrangements for Rita Jean Cederberg. Condolences may be expressed to the family at www.tomblynfuneralhome.com.

The family of Rita Cederberg created this Life Tributes page to make it easy to share your memories.