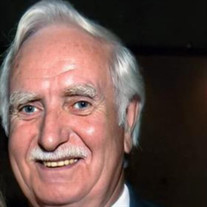 Robert (Bob) Earl Bright, Sr., age 90 years, passed away on Tuesday, September 21, 2021 under the care of WV Caring. Bob had fought a courageous fight for the last 35 years with various illnesses. He was teased about having more than “nine lives” due to his immense will to live. He was born on January 16, 1931 in Elkins, WV to the late John and Mary Bright. Bob attended schools in Randolph County and graduated from Elkins High School. He was a Veteran serving in the Air Force from 1951 to 1955. On June 14, 1958 he was united in marriage to Jacqueline (Jackie) Thornhill who survives. They were married for 63 years. Also surviving is one daughter, Mary Bright Crowder and her fiancée Andrew Thompson, both of Elkins; one son, Robert (Rob) E. Bright, Jr. and his wife, Mary Jane Bright, of Fort Ashby, WV; one granddaughter, Nicole Bright, of Huntington, WV, who was the apple of his eye; and three sisters, Texie (Harding) Mallow, Nellie Shreve and Alice Tharpe; many nephews and nieces, great nephews and great nieces and grand nephews and nieces. Also preceding him in death were his sisters: Dessie Phillips, Ethel Stephens, Eva Breakiron, Flossie Hardy and Fannie Shreve,; two brothers, Burley and Daniel, and his in-laws, Lambert and Ethel Thornhill. Bob was employed as the supervisor of the City of Elkins Street, Water and Sewage Department; Kenneth Dunn Construction Company of Charleston, WV; Vice-President of the D&W Construction Company; medically retired from the Randolph County Board of Education and owner of B&J Sharpening Service. Bob was an avid outdoorsman enjoying hunting, fishing, always catching his limit and raising cattle. He enjoyed training and riding his horses and rooting for his son in horse shows. One of his favorite tricks to entertain family and friends was to have his Palomino, Golden Beauty reach over and give him a hug. Throughout the years his dogs and cats provided him great joy. Bob was a devoted Catholic and an active member of Saint Brendan Catholic Church serving on the Parish Council, Usher, Pall Bearer Coordinator for families in need and a member and Grand Knight of the Knights of Columbus, co-founder of their annual social, and Faithful Trustee of WV Knights of Columbus Our Lady of Peace Assembly 1184, Clarksburg, WV. He was a member of the Randolph County Cancer Society, Randolph County Retired School Personnel, WV School Service Personnel Association, Randolph Lodge #116 Independent Order of Odd Fellows, and HW Daniels Post 29 American Legion and a former member of Elks Lodge and Kiwanis. The family would like to express their gratitude to Bob’s caregivers; Lisa Moody, Barbara Farrar, Arvilla Godwin and Misty Ball who provide excellent care around the clock at his residence prior to his being admitted to WV Caring Hospice Center on September 15, 2021. Friends may call from 5:00 pm until 7:00 pm Friday, September 24, 2021 at Saint Brendan Catholic Church in Elkins with a Vigil Service being held at 6:30 pm from the church with Father James E. O'Connor officiating. A Mass of Christian Burial will be celebrated at 11:00 am Saturday, September 25, from the church with Father James E. O’Connor as the Celebrant. Interment will follow in the Saint Brendan Cemetery. Full military honors will be accorded at the gravesite by members of the Joint Base Andrews Honor Guard Program United States Air Force, H.W. Daniels Post 29 American Legion and Tygart Valley Post 3647 Veterans of Foreign Wars. Masks and social distancing are required for anyone attending the services. Memorial contributions may be made to Saint Brendan Catholic Church, 181 St. Brendan Drive, Elkins, WV 26241 in memory of Bob. The Tomblyn Funeral Home of Elkins is in charge of the arrangements for Robert Earl Bright, Sr. Condolences may be expressed to the family at www.tomblynfuneralhome.com.

Robert (Bob) Earl Bright, Sr., age 90 years, passed away on Tuesday, September 21, 2021 under the care of WV Caring. Bob had fought a courageous fight for the last 35 years with various illnesses. He was teased about having more than &#8220;nine... View Obituary & Service Information

The family of Robert Earl "Bob" Bright Sr. created this Life Tributes page to make it easy to share your memories.