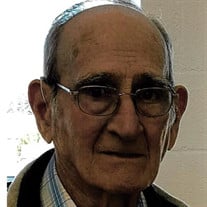 Robert (Bob) Earl Cain, 86, of Elkins, West Virginia passed from this life on Friday, July 24, 2020, at the Elkins Rehabilitation & Care Center, as the result of complications from a stroke he suffered on May 22, 2020. Robert was born in Wendel, WV on May 28, 1934, to Virgie Mae Cain Keller and Coleman French Cain. He graduated from Elkins High School in 1953 and attended WV Tech on a football scholarship until 1954, when he was called to serve in the United States Army and was stationed in Germany as a tank driver. He married Evangeline Clingerman Cain on June 3, 1954, and they were married for sixty four years. Robert worked at The Printcrafters and The Inkspot, in Elkins, for many years as a printing press operator until his retirement. He was an avid reader and an amazing woodworker. He loved spending time in the woods hunting and fishing with family and friends. Robert was an incredibly kind, hardworking, and well-respected person who always put the needs of others before his own. Robert was preceded in death by his loving wife Evangeline Cain in 2018, and his son, Terry Alan Cain, in 2016, brothers Lloyd and Richard, sister Rosemary, Mother Virgie Mae Keller, stepfather Clyde Keller, and his father French Cain. Loved ones will miss Robert until they meet again include his brother Ervin P. Cain of Elkins, and his sister Twila (Cain) Montoney of Ocala, Florida; his five children and their spouses: Rocky Cain and wife, Lori, of Georgetown, DE; Kathryn Holmes and husband, John, of Woodbridge, VA; Jeff Cain and wife, Jennifer, of Marietta, OH; Julia Woody and husband, Steve, of Elkins and his youngest daughter Candy Cain of Elkins; along with their ten grandchildren: Nicholas Cain, Erin Holmes, Elizabeth Woody, Stuart Cain, Chris Holmes, Claire Cain, Corey Woody, Shawn Woody, Amelia Cain, and Ian Cain. Family and friends will mourn their loss but will always cherish his memory. As COVID 19 began spreading in the United States, states began shutting down, and visits with family members ended, Robert’s family would hold weekly “Family Zoom Meetings” so they could stay connected. Robert truly enjoyed those meetings, listening to his children and grandchildren, while watching them share their lives from their homes around the United States. In this new world we live in, gathering in person is a risk that Robert’s family does not wish to encourage. His request for cremation has been honored, and a virtual memorial service is planned for Sunday, August 9, 2020, at 3:00pm via Zoom. Family and friends are welcome to join us to share stories and memories of Robert’s life during the online memorial service. The Tomblyn Funeral Home of Elkins is in charge of the arrangements for Robert (Bob) Earl Cain. Condolences may be expressed to the family at www.tomblynfuneralhome.com. For more information on joining Mr. Cain's Zoom Memorial Service visit the links below: https://www.eventbrite.com/e/a-virtual-celebration-of-life-for-family-and-friends-of-robert-earl-cain-tickets-115268767988 or Click on this direct link to the Zoom service: https://umsystem.zoom.us/j/92488083293?pwd=YkYwUHpjSjJmaVdkbzZJMGVHZk56Zz09 or Go to the Zoom web site at https://zoom.us/join and enter the Meeting ID number: 924 8808 3293 Or Joining a meeting by telephone only: 1. Dial 1-301-715-8592 or 1-646-876-9923. 2. You will be prompted to enter the Meeting ID: 924 8808 3293 3. You will be prompted to enter your unique participant ID. Press # to skip.

Robert (Bob) Earl Cain, 86, of Elkins, West Virginia passed from this life on Friday, July 24, 2020, at the Elkins Rehabilitation & Care Center, as the result of complications from a stroke he suffered on May 22, 2020. Robert was born in Wendel,... View Obituary & Service Information

The family of Robert E. Cain created this Life Tributes page to make it easy to share your memories.