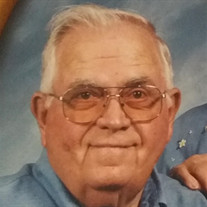 Robert Lee Corbin, age 86 years, a resident of Elkins, WV, passed from this life on February 14, 2018 at Princeton, WV. Mr. Corbin was born December 11, 1931, in Elkins, WV, the son of the late Harry Walter and Florence Anna Heiner Corbin. On July 20, 1984 he was married to Ethel Judy Corbin, who survives. He is survived by two stepsons, Clyde Norman, Camp Creek, WV and Michael Keith Norman, Athens, WV, four step-grandchildren, two step-Great-grandchildren and several nieces, nephews, and cousins. Mr. Corbin was the last surviving member of his immediate family. Besides his parents, he was preceded in death by two sisters, Anna Loretta Stalnaker and Mary Agnes Richards; five brothers, Harry Junior, Warren, Donald, James, Eugene Corbin, one nephew Jimmy Corbin and one niece, Anita Corley . Mr. Corbin was a graduate of Elkins High School class of 1950. He retired as State Wide Surveyor Party Chief of the WV Department of Highways after 28 years of service. Mr. Corbin was a veteran of the United States Navy, 1952-1956, and then served in the U. S. Navy Reserves. During the Korean War era, his assignments included duty on the USS Monterey, the USS McClellan, and the USS Bowers, with time spent in Spain, Portugal, Haiti, and at Guantanamo Bay, Cuba. Mr. Corbin was a member of the American Legion Post 29 for many years, Tygart Valley Post 3647 Veterans of Foreign Wars, Elkins Lodge No. 108 AF and AM, Royal Arch Masons Chapter No. 35, Past Commander of the Pilgrim Commandery No. 21 Knights Templar, Scottish Rite Valley of Clarksburg, and the Osiris Shriners of Wheeling, WV. Mr. Corbin attended the Elkins Church of the Nazarene, where he was actively involved in the construction of the fellowship hall. He and his wife Ethel often assisted the church fellowship dinners. Mr. Corbin was an avid camper and enjoyed hunting and fishing. He was a master craftsman, who completely restored his birthplace home and will be remembered for his abilities of reconstruct and refinish antique furniture. Friends may call from 5:00 P.M. until 7:00 P.M. Monday, February 19, 2018 at the Tomblyn Funeral Home in Elkins. A funeral service will be held at 11:00 AM Tuesday, February 20th from the funeral home Chapel with Pastor Terry Burgess officiating. Interment will follow in the Elkins Memorial Gardens. Masonic Graveside Rites will be conducted by members of Elkins Lodge No. 108 A.F. And A.M. and Full Military Honors will be accorded by members of H.W. Daniels Post 29 American Legion, Tygart Valley Post 3647 Veterans of Foreign Wars and West Virginia National Guard Honor Guard Program. The Tomblyn Funeral Home of Elkins is in charge of the arrangements for Robert Lee Corbin. Condolences may be expressed to the family at www.tomblynfuneralhome.com.

The family of Robert Lee Corbin created this Life Tributes page to make it easy to share your memories.