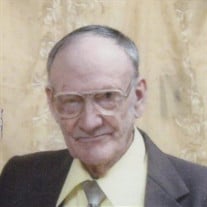 Mr. Robert H. “Bob” Evans, age 85 years, a resident of the Chenoweth Creek Community, Elkins, passed away Tuesday evening, August 30, 2016 at his home. He had been in failing health but his death was unexpected. He was born December 15, 1930 in Elkins a son of the late Harley B. Evans and the late Lena Lowther Evans. On March 16, 1957, he married Joyce Burdette Evans who survives. Also surviving are one daughter, Debra Arbogast and husband Denver, Elkins; two brothers, Hubert Evans, Elkins and Edgar Evans of Vinton, VA; three grandchildren, Robert and Sarah Arbogast of Elkins and Rebekah Arbogast of Morgantown and two great grandchildren, Elliot and Justine. Also preceding him in death were one brother, Ralph Evans and seven sisters, Verda Nestor, Virginia Hyre, Mildred Doerr, Margaret Carr, Ruth Hitt, Katherine Chenoweth and Mabel Cook. Bob attended the schools of Randolph County and was a Veteran of the United States Marine Corp. He was a farmer most of his life and for many years was a carpenter working for the late Loren Chenoweth. He was a member of the Hart Chapel Church at Chenoweth Creek. The family would like to extend a special thanks to Mountain Hospice, The Tucker County Veterans Clinic, Dr. Eric Anger and Staff, The Staff of Home Plus and Dr. O’Keefe and Dr. Lobban of Monongalia General Hospital for the care provided to Bob throughout the past several years. Friends may call from 6:00 pm until 8:00 pm Friday, September 2, 2016 at the Tomblyn Funeral Home in Elkins. A funeral service will be held at 2:00 pm Saturday, September 3rd from the funeral home chapel with Rev. Robert L. Lowther and Pastor David Collins officiating. Interment will follow in the Beverly Cemetery. The family request memorial contributions be made to a charity of choice in memory of Bob. The Tomblyn Funeral Home of Elkins is in charge of the arrangements for Mr. Robert H. “Bob” Evans. Condolences may be expressed to the family at www.tomblynfuneralhome.com.

Mr. Robert H. &#8220;Bob&#8221; Evans, age 85 years, a resident of the Chenoweth Creek Community, Elkins, passed away Tuesday evening, August 30, 2016 at his home. He had been in failing health but his death was unexpected. He was born December... View Obituary & Service Information

The family of Robert H. "Bob" Evans created this Life Tributes page to make it easy to share your memories.