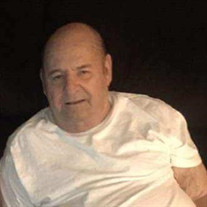 Roger Lee White, age 74 years, a resident of Elkins passed away Friday evening, June 30, 2017 at his home. He was born March 14, 1943 at Harman, a son of the late Marshall G. and Nellie Day White. On September 4, 1962 he was married to Brenda G. Williams who survives. Also surviving are two sons, Randy White and Jesse White of Elkins and one daughter, Teresa Sacks and husband Frank of Elkins. Three sisters, Peg Mullenex of Job, Ruth Alt of Harman and Mary Kepner of Columbia, SC; two half-sisters, Connie Miller and Patty Miller of Riverton and two half-brothers, Larry White of Harrisonburg, VA and Carlton White of Broadway, VA. Three grandchildren, Chad Sacks and companion Amanda Poling, Natasha Sacks and companion Phillip Merriman and Naudia White and one great granddaughter, Kensley Merriman, also survive. Also preceding him in death were one son, Allen James White; two brothers, Neil and Conley White and two sisters, Norma Warner and Louise Spiegel. Roger was a retired carpenter and had worked in construction. He loved to hunt and fish and was a Pentecostal by faith. Friends may call from 11:00 am until 1:00 pm Wednesday, July 5th, 2017 at the Tomblyn Funeral Home in Elkins. A funeral service will be held at 1:00 pm Wednesday from the funeral home chapel with Rev. William McCallister officiating. Interment will follow in the White Cemetery at Job. The family requests that memorial contributions may be made to the FMC Dialysis Center, 100 Main Street, Elkins, WV 26241 in memory of Mr. White. The Tomblyn Funeral Home of Elkins is in charge of the arrangements for Roger Lee White. Condolences may be expressed to the family at www.tomblynfuneralhome.com.

The family of Roger Lee White created this Life Tributes page to make it easy to share your memories.