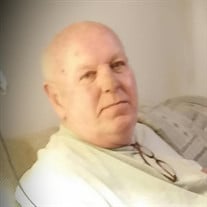 Ronald L. “Ronnie” Ferguson, Sr., age 73 years, a resident of the Glenmore Community in Elkins, WV went home to be with his Lord on Tuesday, August 21, 2018 with his loving family by his side. He was born April 11, 1945 at Baltimore, MD, the son of the late Freda Ferguson Shreve and Russell A. Shreve. Ronnie was previously married to Linda Hoover Nelson and they had their only child, Ronald Ferguson, II of the Glenmore Community in Elkins. Also surviving besides his beloved son, is his angel on earth, Jill, many friends including his special Harley riding brothers, coffee shop buddies and his neighbors, the Jones, Richard, Jerry, Mickey, Susan, Gary, Chuck, Christine, Rodney, Deloris and his adorable Chihuahua “Missy”. Also preceding him in death was his father-in-law, Dencil Hoover and brother-in-law, Steve Hoover. He served in the United States Army from 1968 to 1970 serving in Thailand during the Vietnam War. After being honorably discharged he went to work for the Western Maryland Railroad in Elkins as a brakeman and conductor until his retirement in 2005. He enjoyed riding his Harley Davidson motorcycle and was one of the original Charter members of the Brothers of the Wheel of Elkins where he went by the name of “Bird Dog”. He was a member of Elkins Lodge No. 108 AF & AM, Chapter 35 Royal Arch Mason, Pilgrim Commandry No. 21, Knights Templar, Valley of Clarksburg Scottish Rite Mason Thirty Second Degree, Osiris Shrine of Wheeling, WV, Tygart Valley Shrine Club, the Osiris Shrine Klowns and HW Daniels Post 29 American Legion. Ron had a heart of gold and would do anything to help people. He loved helping with Toys for Tots, Child Advocacy, the West Virginia Children’s Home Christmas and Women’s Aid in Crisis. He was proud to have been baptized by Rev. Thomas Miller previously of Elkins. Friends may call from 6:00 pm until 8:00 pm Friday, August 24, 2018 at the Tomblyn Funeral Home in Elkins. A funeral service will be held at 11:00 am Saturday, August 25th, from the funeral home chapel with Pastor Mike House officiating. Interment will follow at Mountain State Memorial Gardens near Elkins where Masonic Gravesite Rites will be conducted by members of Elkins Lodge No. 108 AF & AM and full military honors will be accorded by members of the West Virginia National Guard Honor Guard Program, HW Daniels Post 29 American Legion and Tygart Valley Post 3647 Veterans of Foreign War. In lieu of flowers, the family suggests that memorial donations may be made to the Randolph County Humane Society, P. O. Box 785, Elkins, WV 26241 in memory of Ron. The Tomblyn Funeral Home of Elkins is in charge of the arrangements for Ronald L. “Ronnie” Ferguson, Sr. Condolences may be expressed to the family at www.tomblynfuneralhome.com.

The family of Ronald Lee Ferguson Sr. created this Life Tributes page to make it easy to share your memories.