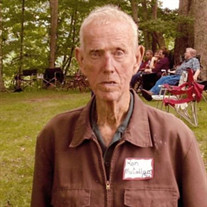 Mr. Ronald O. “Snork” McCollam, age 82 years, a former resident of Randolph County and a resident of Moorefield, passed away Tuesday, October 13, 2020 at the Potomac Valley Hospital at Keyser, WV. He was born November 18, 1937 at Mill Creek, a son of the late Everett Blaine and Fannie Victoria Currence McCollam. On October 1, 1971 he was united in marriage to the former Judy Lane Chewning. The McCollam’s lived in Coalton for two years after their marriage then moved to Mabie where they lived until her death August 29, 2007. Ronald remained at Mabie until April 2018 when he moved to Moorefield, WV to live with his sister-in-law Cathy Carr and her husband Bub. In addition to the Carr’s, he is survived by sister’s-in-law, Margaret McCollam of Mill Creek, Anna Bobo and husband Bob of Fisher, WV, Nancy Haggerty and husband Bill of Purgistville, WV and Sandy Carriger and husband Casey of Moorefield, WV. One brother-in-law, Gerald Chewning survives in Mountain City, TN as well as numerous nieces and nephews. He was the last surviving member of his immediate family having been preceded in death by siblings, Franklin McCollam and wife Glenna, Thomas McCollam, Louise McCollam Phillips and husband Richard and Georgia McCollam Scott and husband Elmer. A graveside service will be held at 10:00 am Friday, October 16, 2020 at the Mill Creek Cemetery. Pastor Frank Stanley will officiate and interment will follow. Memorial contributions may be made to a charity of choice in memory of Ronald. The Tomblyn Funeral Home of Elkins is in charge of the arrangements for Ronald O. “Snork” McCollam. Condolences may be expressed to the family at www.tomblynfuneralhome.com.

The family of Ronald O. McCollam created this Life Tributes page to make it easy to share your memories.