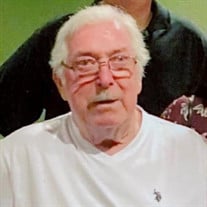 Ronald Richard “Ron” Phillips, age 83 years, a resident of Beverly, WV, passed away at 3:25 PM, Friday, April 23, 2021, at the WV Caring Hospice Center in Elkins. He had been in declining health for several years. He was born May 10, 1937 at the family home near Gilman, WV, a son of the late Otto Jay and Velma Weese Phillips. Surviving is his wife Norma Jean “Jeanie” Stulley Phillips of Beverly; two sons, Ronald Richard Phillips, II and wife Michelle of Elkins and Carson Wade Phillips of Bridgeport, WV; two daughters, Traci Layne Phillips Roach and husband Ronnie of Beverly and Loree Michele Phillips of Elkins. One step-son Bryan Parrish and companion Lori Barr of Belpre, OH; two step-daughters, Laura Parrish of Little Hocking, OH, and Leigh Stubbs and husband John of Waverly, OH. Thirteen grandchildren, nine great grandchildren, one brother, Otto Jay Phillips and wife Mary of Cody, WY; and two sisters, Janet Harman and husband Jim of Elkins and Nancy Jones and husband Tom of Laurens, SC. Several nieces and nephews also survive. Also preceding him in death, in addition to his parents was his brother, Robert Lee “Jock” Phillips, an infant baby boy, step-son Barry Parrish and his beloved dogs, Jake and Sadie. Ron was a graduate of Elkins High School where he excelled in football and track. On August 6, 2016 Ron was inducted into the Randolph County Athletic Hall of Fame. He attended Davis and Elkins College and was a Veteran of the United States Army and the United States Army Reserves. Ron was a Master Electrician, and had worked for Moore Electric in Columbus, OH. He lived in Cortez, CO, Concord, MA, and Uniontown, PA working for Eisenmann & Elliott. He returned to Elkins in 1967 and formed a partnership with Moore Electric and in 1968, he began his own business, Tygart Electric. In 1972, he started working for A & R Service and then worked several years for F K Everest in Fairmont, WV. He went on to work for Columbia Gas Transmission at the Files Creek location in 1989, retiring in 2000. In 1999, Ron and Jeanie established ESP, Inc. Ron became a State Certified Electrical Service Inspector and traveled the mountains of fifteen counties, performing inspections for individuals and businesses. With his kind and compassionate nature he became a very favored Inspector. He continued inspecting services for over twenty years, only calling it quits at the age of 82 when he suffered an 'eye' stroke. Ron loved the outdoors and loved hunting, fishing and camping. He was also an avid Dale Earnhardt fan and had a great collection of Dale's memorabilia. When Dale died, he became a supporter of Dale, Jr. He was also a die-hard fan of West Virginia University football and basketball. Friends may call from 5:00 pm until 7:00 pm Tuesday, April 27, 2021 at the Tomblyn Funeral Home in Elkins. A funeral service will be held at 7:00 pm Tuesday with Pastor David Fisher officiating. Presentation of the American Flag will be made by members of the West Virginia National Guard Honor Guard Program. At Ron’s request, cremation will follow. Masks and social distancing will be required for anyone attending the services. Memorial contributions may be made to St. Jude Children’s Hospital, 501 St. Jude Place, Memphis, TN 38105 / [email protected] in memory of Mr. Phillips. The Tomblyn Funeral Home of Elkins is in charge of the arrangements for Ronald Richard “Ron” Phillips. Condolences may be expressed to the family at www.tomblynfuneralhome.com.

The family of Ronald Richard "Ron" Phillips created this Life Tributes page to make it easy to share your memories.