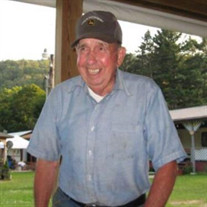 Ronald Edward “Ron” White, age 92 years, a resident of Bemis, went home to be with the Lord at 11:30 P.M. Thursday, March 2, 2017 in the Ruby Memorial Hospital at Morgantown. He had been in his usual health until the past week. He was born July 25, 1924 at Glady, WV, a son of the late Tallman White and the late Grace Barkley White. He was married to Margaret Effie Vandevander White, who he loved very much and who survives at Courtland Acres at Thomas. Mr. White visited his wife every chance he could. Also surviving are three daughters, Rhonda Harris and husband Timothy of Bemis, WV, Judy Inscore and husband Earl of Tunnelton, WV and Bonnie Cain of TN. Seven grandchildren, Courtney, Kayla, Addison, Lisa, Earl, Robin and Amanda; several great grandchildren, great-great grandchildren,nieces and nephews also survive. Also preceding him in death were three brothers, Woodrow, William and Claude and three sisters, Pauline, Leafe and Pearl. Mr. White was a Veteran of the United States Army serving in the 254th Field Artillery. He participated in the Battle of the Bulge and was awarded two Purple Hearts. He worked as a Chief Electrician for Badger Coal Company until his retirement. In 1982 Ron and Margaret opened White’s Campground at Bemis. He remained active with yardwork and particularly enjoyed mowing and wood chopping. Ron knew no strangers and was admired by many. Friends may call from 4:00 P.M. until 8:00 P.M., Monday, March 6, 2017 at the Tomblyn Funeral home in Elkins. A funeral service will be held at 1:00 P.M. Tuesday, March 7th from the funeral home chapel with Pastor Lisa Nelson officiating. Interment will follow in the American Legion’s Little Arlington Cemetery near Cravensdale where full military honors will be accorded at the gravesite by members of the West Virginia National Guard Honor Guard Program, H.W. Daniels Post 29 American Legion and Tygart Valley Post 3647 Veterans of Foreign Wars. Memorial contributions may be made to West Virginia Caring, PO Box 760, Arthurdale, WV, 26520 in memory of Mr. White. The Tomblyn Funeral Home of Elkins is in charge of the arrangements for Ronald Edward “Ron” White. Condolences may be expressed to the family at www.tomblynfunralhome.com.

The family of Ronald Edward "Ron" White created this Life Tributes page to make it easy to share your memories.