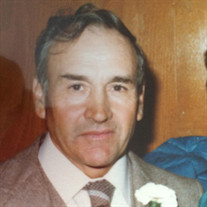 Roy Hale Mullennex, 94, passed from this earthly life on Friday, January 19, 2018, at his home near Whitmer. He was the son of the late Charlie B. and Opal Mallow Mullennex. He was preceded in death by his two sisters, Martha Cooper and Naomi Dean; and by his wife Josie Harman Mullennex. He was born at Whitmer on January 16, 1924, in the heart of the Alleghenies on the farm he loved and acquired upon his father’s death in 1956. He lived and farmed there the rest of his life, taking great satisfaction in the quality of his livestock herds, his stewardship of the farm, and the beauty of its natural setting. He was the recipient of several farming awards and recognitions, including the 1965 Farming for Better Living Upper Monongahela Valley Region 3 Champion Award, the 1990 Farmer’s Recognition Achievement Award for Sheep Production, the 1997 Farmer’s Achievement Award for Beef Production, and the 2007 Randolph County Conservation Farmer of the Year Award. Mr. Mullennex attended a one-room elementary school, then Harman High School where he graduated as Valedictorian in 1941. He attended Potomac Sate College and achieved an outstanding scholastic record there and was inducted into the Theta Sigma Chi Honorary Fraternity, then went on to earn a Bachelor of Science Degree in Agricultural Education at West Virginia University. He married Josie Harman of Harman, on March 20, 1949, and taught Vocational Agriculture at Tygart Valley High School until 1956, when he returned to the family farm. His wife Josie passed away on May 27, 1988. Mr. Mullennex is survived by his three children: Ronald (wife Linda), of Bluefield, VA; Susan, of Whitmer; and Michael (wife Pamela), of Whitmer; eight grandchildren: Brian Mullennex; Rachel Cortell; Asa Mullennex; Abram Racine: Laura Senic; Rory Mullennex; Megan Lawrence; and Sarah Beth Sykes; and ten great-grandchildren. The family will receive friends from 5:00 pm until 7:00 pm Monday, January 22, 2018 at the Whitmer Church of God at Whitmer. Mr. Mullennex will then be moved to the Tomblyn Funeral Home of Elkins where a funeral service will be held at 11:00 am Tuesday, January 23rd from the funeral chapel. The Rev. Lester Lind and Pastor Jim Purnell will officiate, with memorial comments by Mr. Michael Snyder. Interment will follow at Mountain State Memorial Gardens at Gilman. The family suggests that memorial contributions may be made to Mountain Hospice, 1600 Crim Avenue, Belington, WV 26250 in memory of Mr. Mullennex. The Tomblyn Funeral Home of Elkins is in charge of the arrangements for Roy Hale Mullennex. Condolences may be expressed to the family at www.tomblynfuneralhome.com.

Roy Hale Mullennex, 94, passed from this earthly life on Friday, January 19, 2018, at his home near Whitmer. He was the son of the late Charlie B. and Opal Mallow Mullennex. He was preceded in death by his two sisters, Martha Cooper and Naomi... View Obituary & Service Information

The family of Roy Hale Mullennex created this Life Tributes page to make it easy to share your memories.

Roy Hale Mullennex, 94, passed from this earthly life on Friday,...