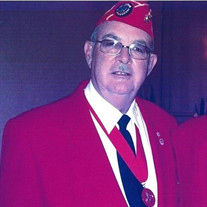 Roy E. Wood, a resident of Valley Head and more recently of Huttonsville passed away Thursday, November 8, 2018 at his home. He was born at Mingo, WV on November 30, 1945 to the late William Herbert and Mary Woodsie Sharp Wood. He attended the schools of Randolph County and graduated from Tygarts Valley High School in 1963. He enlisted in the Marine Corps right out of high school in 1963. In the summer of 1964, on July 18, he married Sharon Lynn Thompson, who preceded him in death on November 10, 2013. He is survived by his daughter Anita Cay and her husband, Pete Tacy, II. He is also survived by two brothers, R. W. Wood and his wife Cay of Elkins, WV and D. Joseph Wood of Ruckersville, VA, and one sister, Betty L. Ware and her husband Ralph of Nokesville, VA, and a brother-in-law, Mike Thompson and his wife Darlene, and several nephews and nieces. He is also survived by very special friends, Sherry and Lynn Ware, and a very special little girl, Lynnlee Ware (his best little buddy), and his best furry friend, his cat "Puss". After being discharged from the Marine Corp in 1967, he returned home to West Virginia. He worked for United Airlines in Charleston, WV until he started driving trucks in a business with his brother. He then moved back to Huttonsville, where he drove truck for Burns Motor Freight in Marlinton, and then for Carl E. Smith Pipeline out of Sandyville, WV for 17 years. He then drove for Myles Lumber Company in Elkins for 20 years until he retired from driving tractor trailers. He loved driving a truck, hunting and spending time on the farm at Ware's Ridge in Valley Head where he lived until his health made it necessary to move down off the mountain. Roy enlisted in the U.S. Marine Corp. in June 1963 at the Marine Corp. Recruit Depot at Parris Island, SC. He was a member of the 338 Platoon comprised entirely of West Virginians and formed by the USMC in honor of the state's centennial. He was stationed with the 2nd Marine Division at Camp Lejeune, NC, during the Vietnam Era and was deployed to the Caribbean and Mediterranean seas with the Marine Amphibious Group. He also saw duty in Puerto Rico, Cuba, Guam and Okinawa, Japan. He attained the rank of Sergeant and was honorably discharged in June 1967.A member of the former Marine Corp. League Tygart Valley Detachment, Roy was a life member of the Leland D. "Crow" Crawford Det. 956 Marine Corp League of Elkins where he served as Judge Advocate and Paymaster. On the MCL Department of West Virginia level, he served as the Sergeant-at-Arms. A life member of the MCL's fun-and-honor society, the Military Order of the Devil Dogs, Roy was the junior vice pound keeper and dog robber for the MODD Mountain Hounds Pound 358, the police dog for the West Virginia Pack and the deputy mad dog for the National Kennel level. He was also the recipient of the West Virginia Pack Dog of the Year and the Pound Dog of the Year. Roy was the recipient of several prestigious MCL awards including the Detachment Marine of the Year and Department of West Virginia Marine of the Year and received the MCL Distinguished Citizen Award on the gold, silver and bronze levels and the Distinguished Service Award on the local, state and national levels. For 15 years he was active in Det. 956's Toys for Tots campaigns in which he assisted in collecting, sorting and distributing toys to 2,000 underprivileged children yearly in Randolph and surrounding counties. He also assisted in fund-raisers conducted by the detachment to purchase shoes for children in the Randolph County Head Start Pre-School Program. He received the Chapel of the Four Chaplains Legion of Honor Award for his exemplary service and long-term contributions for military and civic activities which included working with Christmas food basket distributions, fund-raisers for youth-oriented sports activities, volunteering with the Randolph County Fair where he assisted with the county rodeos and serving as the Chairman and a Trustee of the Mingo Cemetery since 1982. A member of HW Daniels Post 29 American Legion and its Honor Guard, Roy served in flag details at funerals for Veterans. He was a member of the Lt. Col. Elihu Hutton Camp 569 of the Sons of Confederate Veterans and the Mingo Historical Society and was a former member of the Eagles and Jaycees. Friends may call from 5:00 pm until 8:00 pm Sunday, November 11, 2018 at the Tomblyn Funeral Home in Elkins. A funeral service will be held at 1:00 pm Monday, November 12th, from the funeral home chapel with Rev. Sam Felton officiating. Interment will follow at the Mingo Cemetery in Mingo, WV where full military honors will be accorded by members of the Leland D. Crawford Detachment Marine Corp. League, H.W. Daniels Post 29 American Legion and Tygart Valley Post 3647 Veterans of Foreign Wars. Memorial contributions may be made to the Marine Corp. League Toys for Tots, PO Box 852, Elkins, WV 26241 or the Mingo Cemetery, c/o Anita Tacy, 478 Haddens Mill Run, Huttonsville, WV 26273 in memory of Roy. The Tomblyn Funeral Home of Elkins is in charge of the arrangements for Roy E. Wood. Condolences may be expressed to the family at www.tomblynfuneralhome.com.

Roy E. Wood, a resident of Valley Head and more recently of Huttonsville passed away Thursday, November 8, 2018 at his home. He was born at Mingo, WV on November 30, 1945 to the late William Herbert and Mary Woodsie Sharp Wood. He attended... View Obituary & Service Information

The family of Roy E. Wood created this Life Tributes page to make it easy to share your memories.

Roy E. Wood, a resident of Valley Head and more recently of Huttonsville...