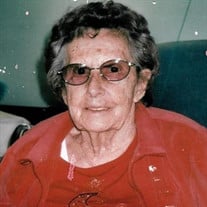 Our mother, Ruby Bonnell made her journey to her heavenly home Wednesday evening, April 5, 2017 with her family by her side. She was born August 20, 1925 in Pendleton County and moved to Glady at the age of 16. There she met her husband, Earl Bonnell. Their courtship grew through their “love letters” in World War II. They married November 2, 1944 and were married 68 years before his passing in 2013. She was the daughter of Samuel W. and Mona A. Arbogast. As her children, Loren and wife Charlene and Elaine and husband Jim Douglas we give her honor for being a wonderful mother. Proverbs 31:28-30 (speaking of a virtuous woman) says “Her children arise up, and call her blessed”… “a woman that feareth the Lord she shall be praised.” Honor is also given by her grandchildren, Nathaniel and wife Tina Bonnell and Farrah and husband Cameron Farley. And special grandchildren Dale and wife Alice Leeson, Sherry Kyle, Velora and husband Dave Anderson, Patty and husband Martin Harvey, and Katina and husband Rob Elbon. Great grandchildren Braelyn and Kelsea Bonnell and Breckston and Pierslyn Farley. Also special great grandchildren Zach, Lance, Micah, Gage, Jaide, Zayne, Lily, Jared, and Justin. She was the last of eight siblings. Five brothers: Jesse, Dempsey, Weldon, Keith and Junior and two very loving sisters Ada Nelson and Emelene Cave. She was a “stay at home mom” occasionally being a fill in mail carrier. Together our mom and dad were the “glue” in their families, there with a helping hand, or socializing, and always enjoying good meals together. Those qualities also reached out to the community and others they met. We are most thankful for this strong legacy. Her courageous battle with Alzheimer’s is over. Friends may call from 6:00 pm until 8:00 pm Saturday, April 8th, 2017 at the Tomblyn Funeral Home in Elkins. A funeral service will be held at 1:00 pm Sunday, April 9th from the funeral home chapel with Rev. Ron Phillips officiating. Interment will follow in the American Legion’s Little Arlington Cemetery. Memorial contributions may be made to the Alzheimer’s Association of West Virginia Northern Regional Office, 1299 Pineview Drive Suite 3, Morgantown, WV 26505 in memory of Mrs. Bonnell. The Tomblyn Funeral Home of Elkins is in charge of the arrangements for Ruby Bonnell. Condolences may be expressed to the family at www.tomblynfuneralhome.com.

Our mother, Ruby Bonnell made her journey to her heavenly home Wednesday evening, April 5, 2017 with her family by her side. She was born August 20, 1925 in Pendleton County and moved to Glady at the age of 16. There she met her husband, Earl... View Obituary & Service Information

The family of Ruby Bonnell created this Life Tributes page to make it easy to share your memories.

Our mother, Ruby Bonnell made her journey to her heavenly home...