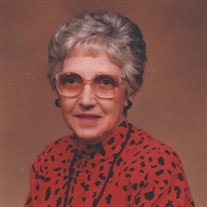 Ruby J. Jones, age 88 years, a resident of Coalton, passed away Thursday, June 1, 2017 at her home with her family by her side. She was born July 15, 1928 at Beverly, the daughter of the late Donald Dawson and Ella Watson Bennett. On January 12, 1946 at Elkins, she was married to Earl S. Jones who preceded her in death March 2, 1997. She is survived by her children, Darlene Lynn and companion Mike Kiser of Parkersburg, WV, Diana Rider of Coalton, Earl Scott “Casey” Jones, Jr., and wife Linda of Mabie, Elizabeth “Beth” Smith and companion David Antoline of Coalton and Janice Jones of Coalton. Grandchildren, Jeff Rider and companion Maria Hammonds, Stacy Truman and fiancée Chris Travis, all of Coalton, Daniel Bowers and wife Rebbeca of Holiday, FL, Ashley Spencer and husband Ryan of Coalton and Melissa Harlan and husband BJ of Coalton. Great grandchildren, Mitchell Bowers of Buckhannon, Riley Rider, Stella Travis, Ayla Spencer, Hunter and Abby Harlan, all of Coalton. Also surviving is a special sister-in-law, who was there until the end, Carolyn Bennett, special niece, who helped with her care through the years, Maryann Kyle, a niece and nephew who Ruby helped raise for a while, Sherry Flurney and Donnie Bennett, brother-in-law, Jack Zirkle and many nieces and nephews who she loved very much also survive. Ruby was the last surviving member of her immediate family having been preceded in death by brothers, Harold “Bus” Bennett, Lloyd and Jerry Bennett, sisters, Betty Myers and Agatha “Sue” Bennett, sister-in-law, Mary Moore, brothers-in-law, Issac and Bernard Jones. Ruby worked at Nella’s Nursing Home for several years after raising her children. She then went back to school and got her diploma and then enrolled in the LPN Nursing Program at Davis Memorial Hospital where she graduated in 1975. She was employed at Davis Memorial Hospital until her retirement. She was a Presbyterian by faith and attended the Weaver Church of the Nazarene. The family would like to thank Mountain Hospital for the care they gave their mother and their family. Special thanks to nurses, Candy Farley, Andrew Starkey, Dawn Witbank, the aids from Mountain Hospice, Liz Wymer from the Randolph County Senior Center and to Dr. Eric Anger for taking such good care of our mother. She was a very special person who was the most loving and caring mother, grandmother, aunt and friend that anyone could ask for. She only saw the best in everyone she met and her children and grandchildren loved her very much. She will be truly missed. Friends may call from 6:00 pm until 8:00 pm Sunday, June 4th, 2017 at the Tomblyn Funeral Home in Elkins. A funeral service will be held at 11:00 am Monday, June 5th, from the funeral home chapel with Pastor Bryan Headley officiating. Interment will follow in the Mountain State Memorial Gardens at Gilman. The Tomblyn Funeral Home of Elkins is in charge of the arrangements for Ruby J. Jones. Condolences may be expressed to the family at www.tomblynfuneralhome.com.

Ruby J. Jones, age 88 years, a resident of Coalton, passed away Thursday, June 1, 2017 at her home with her family by her side. She was born July 15, 1928 at Beverly, the daughter of the late Donald Dawson and Ella Watson Bennett. On January... View Obituary & Service Information

The family of Ruby J. Jones created this Life Tributes page to make it easy to share your memories.