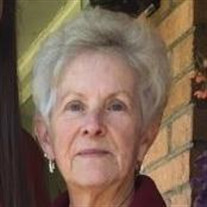 Sharon Kay Lloyd, resident of Elkins WV, passed away peacefully at home on February 18th, 2020, after her courageous fight with pancreatic cancer. She was born Sharon Kay Wymer on October, 4th 1945 in Whitmer WV, a daughter of the late Luciane “Louie” and Mary Susan Wymer. She was united in marriage on February 27, 1965 in Elkins, WV to the love of her life Robert Arnold Lloyd Sr. who preceded her in death on March 6th 2013. Also preceding her in death was a sister, Dorless Deanna Wymer, as well as several aunts, uncles and cousins. She is survived by her three children daughter Marsha K. (Lloyd) Coakley and husband Scott of Rosemont, WV, and two sons Robert A. Lloyd Jr. and wife Patricia of Bridgeport, WV, and Darren O. Lloyd and wife Marcy of Zebulin North Carolina. Also surviving is one sister, Mary Watts of Elkins, two brothers Jerry Wymer and wife Linda of Brookville Md, and Steve Wymer and wife Susie of Whitmer, WV. Sharon has seven grandchildren as well as three step-grandchildren; TJ and Daniel Coakley, David, Cameron, Nicolette, Colin and Caroline Lloyd, Colin, Christopher and Taylor Moore. Sharon was blessed with one great-grandson, Robert Arnold Lloyd III. Sharon was also blessed with a large circle of people, who although were not relatives, she considered her extended family. Sharon was a 1963 graduate of Harman High School, Harman WV. Sharon was a devoted wife, mother and homemaker. She was a lifelong member of the Wayside United Methodist Church of Poe Run, where she was an active member. Over the years, she held many offices for the operations of the church. Sharon was a devout Christian, enjoying work for the Lord, as the church was a very big part of her life. Outside of the church, her compassion for helping others was evident in the various church organizations, programs, and local charities of which she devoted a lot of her time. Sharon really enjoyed working in her garden among her flowers and plants, baking and cooking; watching her grandchildren and great grandson grow, but her greatest pleasure was spending time with Bob. Friends may call from 6:00 pm until 8:00 pm Friday, February 21, 2020 at the Tomblyn Funeral Home in Elkins. A funeral service will be held at 11:00 am Saturday, February 22nd at the funeral home chapel with Rev. Gary Phillips officiating. Interment will follow in the Elkins Memorial Gardens on the Country Club Road, Elkins. Memorial contributions may be made to the Wayside United Methodist Church, 811 Isner Creek Road, Elkins, WV 26241 or to Mountain Hospice, 1002 Crim Ave., Belington, WV 26250 in memory of Sharon. The Tomblyn Funeral Home of Elkins is in charge of the arrangements for Sharon Kay Lloyd. Condolences may be expressed to the family at www.tomblynfuneralhome.com.

Sharon Kay Lloyd, resident of Elkins WV, passed away peacefully at home on February 18th, 2020, after her courageous fight with pancreatic cancer. She was born Sharon Kay Wymer on October, 4th 1945 in Whitmer WV, a daughter of the late Luciane... View Obituary & Service Information

The family of Sharon Kay Lloyd created this Life Tributes page to make it easy to share your memories.