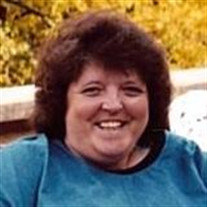 Sharon Cunningham Swecker, age 53 years, a resident of Bowden, passed away Monday afternoon, July 3, 2017. She was born January 1, 1964 at Elkins, the daughter of the late Floyd “Mick” Cunningham and Dorothy Isner Cunningham. On February 15, 1992 she was married to Carl Swecker who survives at Bowden. Also surviving is one son, Brad Swecker of Alpena, two sisters, Brenda Stalnaker and husband James of Farmington and Amelia “Amy” VanReenen of Alpena and two granddaughters, Kelsey and Abbigail Swecker. Five sisters-in-law, Sue Dean, Loretta Burner and husband Corky, Nancy Lanham and husband Delmar, Naomi Lanham and Belinda Toms and husband Mike and one brother-in-law, Orville Swecker. Several nieces and nephews and her dogs, Rocky and Muffie also survive. Also preceding her in death was one brother, Kenneth M. Cunningham, one sister, Vicki Elaine Cunningham and brother-in-law, Harold “Hum” VanReenen. Sharon was a graduate of Elkins High School with the Class of 1982 and had worked as a Pharmacy Tech at Health Center Pharmacy for thirty four years. She loved to camp, collect figurines, horses, gardening and spending time with her granddaughters. Friends may call from 5:00 pm until 8:00 pm Friday, July 7th, 2017 at the Tomblyn Funeral Home in Elkins. A funeral service will be held at 11:00 am Saturday, July 8th, from the funeral home chapel with Rev. Conley Ogden officiating. Interment will follow in the Alpena Cemetery. Memorial contributions may be made to the Randolph County Humane Society, P O Box 785, Elkins, WV 26241 in memory of Sharon. The Tomblyn Funeral Home of Elkins is in charge of the arrangements for Sharon Cunningham Swecker. Condolences may be expressed to the family at www.tomblynfuneralhome.com.

The family of Sharon L. Swecker created this Life Tributes page to make it easy to share your memories.