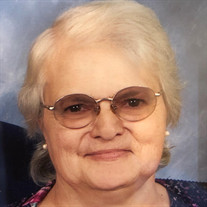 Sharyn Vaughn White Kerns, age 77 went home to be with the Lord on June 18, 2019, surrounded by her Family and under the care of West Virginia Caring, in the Elkins Regional Convalescent Center, where she had made her home for the past seven years. Sharyn was born December 4, 1941, in Elkins, WV, a daughter of The Late Bruce Haden and Dorothy Kerr White. Sharyn was raised on Kelly Mountain by her Uncle and Aunt, The Late Coleman and Ruth Fansler and attended the schools of Randolph County where she was a graduate of Elkins High School with the class of 1961. During her teenage years she was a 4-H member, belonging to the Mingo Tribe and was proud to have followed her years in 4-H ending as a Charting Pin Recipient. On September 23, 1961, at Sully, West Virginia, Sharyn was united in marriage to James Wilson Kerns, Sr. who preceded her in death on September 5, 2006. They had celebrated 44 years of marriage. She enjoyed being a homemaker, mother, and grandmother, she was a kind and gracious friend to her many neighbors over the years. Sharyn had also worked outside the home, first as a seamstress at Reidboard, then as an eyelet setter at Bata Shoe Company and later as a secretary for her husband in his woodworking business, Mountain State Moulding. She was a charter member of Faith Baptist Chapel, where she was a member of the adult Sunday school class, a bible school teacher and choir member. Later she became a member of Mt. Carmel Baptist Church in Beverly, WV. Sharyn was a former parent volunteer in the Title 1 classroom at Homestead Elementary School where she was named the parent volunteer of the year in 1984. She loved Country and Gospel Music, singing Hymns, reading her Bible and accompanying her husband as he sang each week in the nursing homes and also with their friends at the Crystal Springs Jamboree on Saturday evenings. She loved the Nurses and Aides who took care of her at ERCC and always worn a bright smile for each of them. She especially enjoyed singing along with The Old Brick Playhouse members each time they came to visit the residents. Sharyn is survived by three daughters, Mrs. Denver (Ellen) Fortney of Mill Creek, Mrs. William (Debra) West of Brandywine, Susan Maxwell of Mill Creek and one son, James W Kerns, II and wife Cathy of Snow Hill, MD. Twelve grandchildren, Denny Fortney of Beverly, Kymberly Autry of Elkins, Emmitt and Joseph West of Brandywine, Nathaniel Kerns-Paugh of Texas, Amy Ginnavan of MD, James III and Chester Winters of French Creek and Andrew, Ian, Isaac, and Elijah Maxwell of Mill Creek. Ten great grandchildren, Bethany Ellen and Denny James Fortney, Logan and Chase Ginnavan, Michela, John Robert and James Winters IV, and Jenelle, Jaden and Kolden Winters. Also surviving are two sisters Janet Lytle of Elkins, and Margaret Ann Petrice Sumner, a niece Carlene Lytle, a brother in law, Ralph Kerns and wife Mary Ann and a sister in law Barbara Jo Kerns. Preceding her in death was one infant daughter, one great grandson Logan Daniel Autry, five brothers Donald, Bill, Johnny, Jackie, and Sherwood White, and a brother in law, Leonard Kerns. Friends may call from 11:00 am until 12:00 pm Saturday, June 22, 2019 at the Tomblyn Funeral Home in Elkins. A funeral service will be held at 12:00 pm Saturday from the funeral home chapel with Rev. Leon Brown officiating. Interment will follow at the Parsons City Cemetery at Parsons, WV. The Tomblyn Funeral Home of Elkins is in charge of the arrangements for Sharyn Vaughn White Kerns. Condolences may be expressed to the family at www.tomblynfuneralhome.com.

Sharyn Vaughn White Kerns, age 77 went home to be with the Lord on June 18, 2019, surrounded by her Family and under the care of West Virginia Caring, in the Elkins Regional Convalescent Center, where she had made her home for the past seven... View Obituary & Service Information

The family of Sharyn Vaughn Kerns created this Life Tributes page to make it easy to share your memories.

Sharyn Vaughn White Kerns, age 77 went home to be with the Lord...