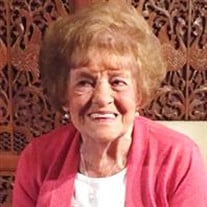 Shirley Ellouise Daff, 87, a resident of Valley Head, West Virginia passed on from this life during the afternoon of August 23rd, 2017. Shirley was born August 7th, 1930 in Marlinton, WV and was the youngest child of the late William Ambrose and Edna Hartley Sage. She is preceded in death by nine siblings: Russell Sage, Mazie Hannah, Martha “Mattie” Tumblin, Mary Phillips, Ray Sage, Glenn Sage, Dena Foreback, Cecil Sage, and Josephine “Jo” Sharp. She is survived by one sister: Madeline Honeycutt. She married Meredith E. Daff on June 26th, 1954, who preceded her in death in 1971. Shirley is survived by three wonderful daughters: Sharon Ellouise Smith of Valley Head, Donna Gracealee Hamrick of Amelia, OH, and Merredith LaJean Gear of Valley Head and their husbands: Bruce Smith, Tim Hamrick, and Rick Gear. Shirley had five grandchildren: Hillary Fleck of Valley Bend, Miranda Hamrick of Cincinnati, OH, Jordan Smith and wife Amy of Huttonsville, Erica Roth and husband Adam of Huttonsville, and Natoshia Fike and husband Derrick of Elkins. In her final years she found what may have been the greatest joy of her life, her great-grandchildren: Sage and Fynn Fleck, Whitley and River Smith, Gideon Roth, and Avery and Parker Fike. Shirley worked for Randolph County Schools as an aid until her retirement in 1995. After her retirement she enjoyed travelling and socializing with friends. She was also famous among friends and family for the best bread in Valley Head and seemed to always have a fresh loaf or some hot rolls still warm from the oven. She was a passionate member of the Mt. View Church of the Nazarene in Huttonsville until the time of her death. Shirley was a lovely soul and brought joy into the lives of all those who knew her. She will be most remembered and missed as a loving mother, grandmother, and great-grandmother. Friends may call from 12:00 pm until 2:00 pm Saturday, August 26, 2017 at the Tomblyn Funeral Home in Elkins. A funeral service will be held at 2:00 pm Saturday from the funeral home chapel with Pastor J. Tim Turner officiating. Interment will follow in the Mingo Cemetery. The Tomblyn Funeral Home of Elkins is in charge of the arrangements for Shirley Ellouise Daff. Condolences may be expressed to the family at www.tomblynfuneralhome.com.

Shirley Ellouise Daff, 87, a resident of Valley Head, West Virginia passed on from this life during the afternoon of August 23rd, 2017. Shirley was born August 7th, 1930 in Marlinton, WV and was the youngest child of the late William Ambrose... View Obituary & Service Information

The family of Shirley Ellouise Daff created this Life Tributes page to make it easy to share your memories.