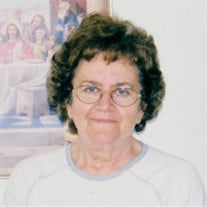 Shirley Violet Roy age 80 years, a resident of Harman, went home to be with her Lord and Savior, Jesus Christ; whom we are sure met her holding the hand of “Little Frankie”, her three year old son that she lost in 1959 and yearned for since, on Sunday, September 25, 2016 at her home surrounded by her loving family and her dog, Zoey. She was born September 2, 1936 at Pendleton County, WV, the daughter of the late Gerald and Myrtle Mallow Bible. On June 8, 1955 at Oakland, MD, she was married to Kenneth Roy who preceded her in death November 21, 2000. She is survived by two sons, Greg Roy and Janice and Bradley Roy and wife Leslie, all of Job, WV; two daughters, Pam Pennington and husband Freddie of Job and Patty VanKirk of Wilmington, NC. Four brothers, Melvin Bible and wife Jeanne of Penn Run, PA, Kenny Bible and wife Bev of Franklin, WV, Frankie and wife Bonnie and Dave Bible and wife Debbie of Davis, WV; two sisters, Arlena Siepel of Lancaster, OH and Lyla Bradle and husband Harold of Lampasas, TX. Also surviving is one brother-in-law, Joe Pregent of Lancaster, OH, fourteen grandchildren, eighteen great grandchildren and a special friend, Esther and childhood friends, Geraldine, Elsie and Sarah. Also preceding her in death was one son, Kenneth Franklin Roy, her sister Shelva Pregent and two infant sisters and one infant brother. Shirley was a graduate of Mountaineer High School at Davis, WV with the Class of 1954. She was a homemaker and a member of the VFW Post 5781 Ladies Auxiliary of Harman. She was a member of the Job United Methodist Church. Friends may call from 6:00 PM until 8:00 PM Tuesday, September 27, 2016 at the Tomblyn Funeral Home in Elkins. On Wednesday morning September 28th, Mrs. Roy will be moved to the Job United Methodist Church for visitation from 10:00 AM until 12:00 Noon the funeral hour. Rev. Earl Bible and Rev. Eli Hostetler will officiate and interment will follow in the Lower Dam Cemetery at Job, WV. The Tomblyn Funeral Home of Elkins, is in charge of the arrangements for Shirley Violet Roy. Condolences may be expressed to the family at www.tomblynfuneralhome.com.

Shirley Violet Roy age 80 years, a resident of Harman, went home to be with her Lord and Savior, Jesus Christ; whom we are sure met her holding the hand of &#8220;Little Frankie&#8221;, her three year old son that she lost in 1959 and yearned... View Obituary & Service Information

The family of Shirley V. Roy created this Life Tributes page to make it easy to share your memories.