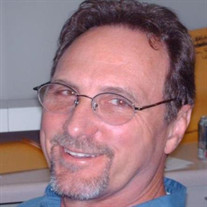 Dr. Steven Michael Barnett, age 65 years, a resident of Elkins, WV. passed away Wednesday, February 7, 2018 at his home. He was born November 24, 1952 in Baltimore, Md., a son of Shirley M. Stevenson Wend who survives in Chambersburg, Pa. and the late Edward G. Barnett. On July 5, 2003, he was married to Kimberly D. Johnson Barnett who survives in Elkins. Also surviving are two children, Brendan William Barnett and Jillian Stevenson Barnett of Elkins, one brother, Rick Kelley Barnett of Severn, Md. , a niece, Sunshine Barnett, great nephew, Kaydin and great niece Nadia, of Bowie, Md. Also preceding him in death was one brother, Lee MacGregory Barnett. Steve was a 1974 graduate of Johns Hopkins University and a 1978 graduate of the University of Maryland Medical School. He served his internship in Baltimore and his residency in Maine and Boston. After residency, he worked as a Radiologist at West Virginia University in Morgantown, WV for five years, followed by six years at St. Joseph's Hospital in Parkersburg, WV. He came to Elkins in 1993 where he worked for two years at Davis Memorial Hospital, then for Radiological Physicians Associates until Parkinson's disease resulted in his disability in 2013. He was a member of the American Roentgen Ray Association, North American Radiological Society, American Institute of Ultrasound in Medicine, West Virginia Medical Society and was a previous member of the BPOE Lodge No. 1135 of Elkins. "Dr. B" was a pilot and enjoyed his own plane. He was a travel enthusiast with ventures including New Zealand, Butan, Chile, and many other foreign and exotic places, seeking the most adventurous kayaking and other sports including snowboarding, hiking and bungee jumping. Steve also delighted people with his personally handcrafted Christmas gifts which included stained glass and wood working. The 4th of July parties he hosted at his home were enjoyed by many for years. His contributions to his community were numerous and he will be sorely missed. A Celebration of Life will be held at 2:00 pm on Arbor Day, Friday, April 27, 2018 on the front lawn of the Davis Medical Center in Elkins. A reception will immediately follow in the main lobby of the hospital. The Tomblyn Funeral Home of Elkins, WV is in charge of the arrangements for Dr. Steven Michael Barnett. Condolences may be expressed to the family at www.tomblynfuneralhome.com.

Dr. Steven Michael Barnett, age 65 years, a resident of Elkins, WV. passed away Wednesday, February 7, 2018 at his home. He was born November 24, 1952 in Baltimore, Md., a son of Shirley M. Stevenson Wend who survives in Chambersburg, Pa. and... View Obituary & Service Information

The family of Steven Michael Barnett created this Life Tributes page to make it easy to share your memories.