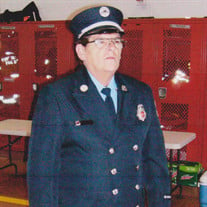 Steven F. Vance, age 57 years, a resident of Stafford, VA for many years and more recently a resident of Whitmer, passed away Tuesday, June 21, 2016 in the Ruby Memorial Hospital in Morgantown. He was born January 31, 1959 at Harman a son of the late Snowden L. Vance, Jr. and the late Virginia L. Elza Vance. Surviving are two brothers, Douglas J. Vance and wife Gloria of Aurora, CO and Gregory R. Vance and wife Linda of Weston, one sister, Frances G. McLaughlin and husband Pete of Marlinton, WV, four nieces and nephews, Christina, Michael, Joseph and Candance , great nieces, Kayla, Jessica and Alexis and great nephew, Andrew. Two uncles, Hollis Vance and wife Adrienne of Elkins, John Elza of Whitmer, an aunt Sandra Judy and husband Dwyer of Whitmer and several cousins also survive. Steve was a graduate of Elkins High School with the Class of 1977 and was a Veteran of the United States Marine Corp. He was employed as a Firefighter at Fort Belvoir Fire and Emergency Services at Fort Belvoir, Virginia from 1989 until his retirement in 2014. He was a member of the International Association of Firefighters. Friends may call from 6:00 pm until 8:00 pm Friday, June 24, 2016 at the Tomblyn Funeral Home in Elkins. On Saturday, June 25th he will be moved to the Whitmer United Methodist Church for visitation from 12:00 noon until 1:00 pm the funeral hour. Rev. Earl Bible will officiate and interment will follow in the Laurel Hill Cemetery near Whitmer. Leland D. Crawford Detachment 956 Marine Corp League, H.W. Daniels Post 29 American Legion and Tygart Valley Post 3647 Veterans of Foreign Wars will conduct full military honors at the gravesite. Memorial contributions may be made to the Whitmer Volunteer Fire Department, PO Box 68, Whitmer, WV 26296 in memory of Steve. The Tomblyn Funeral Home of Elkins is in charge of the arrangements for Steven F. Vance. Condolences may be expressed to the family at www.tomblynfuneralhome.com.

Steven F. Vance, age 57 years, a resident of Stafford, VA for many years and more recently a resident of Whitmer, passed away Tuesday, June 21, 2016 in the Ruby Memorial Hospital in Morgantown. He was born January 31, 1959 at Harman a son of... View Obituary & Service Information

The family of Steven F. Vance created this Life Tributes page to make it easy to share your memories.