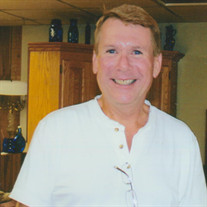 Steven D. Wetsch, age 55 years, a resident of Elkins, passed away Monday, October 18, 2016 at his home. He was born December 7, 1960 in Morgantown, WV, a son of Donald T. and Carrie L. Armentrout Wetsch who survives in Elkins. Also surviving are two brothers, Daniel Wetsch and wife Barbara of Elkins and Doug Wetsch of Point Pleasant, WV; two nephews, Derek and Aaron Wetsch of Elkins, two aunts, Ann Armentrout of Steven City, VA, Jean Wimer and husband Larry of Riverton and several cousins. Special friends, Joe and Sandra Godwin and Julia and Lauren Brumfield, all of Elkins also survive. Preceding him in death was one infant brother, Darryl Wetsch, maternal grandparents, Grover and Margie Harper Armentrout and paternal grandparents, Tom and Catherine Wetsch. Steve was a graduate of Elkins High School with the Class of 1978 and while in high school was a member of the Jazz and Marching Bands, the National Honor Society and Key Club. He was owner and operator of a tire business and was a bus driver for the Randolph County Board of Education. He was a member of the I.O.O. F. Lodge No. 116 of Elkins and a Randolph County 4-H Leader. He enjoyed woodworking, construction, auto mechanics and other skilled jobs, meeting people and he always had a smile. He was a Methodist by faith. Friends may call from 6:00 pm until 8:00 pm Friday, October 21st and 10:00 am until 11:00 am Saturday, October 22, 2016 at the Tomblyn Funeral Home in Elkins. A funeral service will be held at 11:00 am Saturday, October 22nd from the funeral home chapel with Rev. Dr. Basil A. Hensley officiating. Interment will follow in the Maplewood Cemetery. Memorial contributions may be made to the Amyloidosis Foundation, 7151 North Main Street, Suite 2, Clarkston, MI 48346 or to the Randolph County 4-H Leaders, 32 Randolph Avenue, Suite 102, Elkins, WV 26241 in memory of Steven. The Tomblyn Funeral Home of Elkins is in charge of the arrangements for Steven D. Wetsch. Condolences may be expressed to the family at www.tomblynfuneralhome.com.

Steven D. Wetsch, age 55 years, a resident of Elkins, passed away Monday, October 18, 2016 at his home. He was born December 7, 1960 in Morgantown, WV, a son of Donald T. and Carrie L. Armentrout Wetsch who survives in Elkins. Also surviving... View Obituary & Service Information

The family of Steven D. Wetsch created this Life Tributes page to make it easy to share your memories.