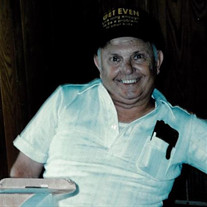 Styrl Wesley Hively, age 92 years, a resident of Elkins, passed away Saturday, March 17th, 2018 at Davis Medical Center. He was born May 29, 1925 at Dunmore, a son of the late Walter A. and Sarah Simmons Hively. On March 5, 1965 at Elkins, he was married to Correna “Corrie” Taylor Hively who survives. Also surviving are two children, Anita Harper of Franklin and Styrl “Wesley” Hively, Jr. of Elkins who helped care for his dad. One sister, Margaret Sedgewick of Norfolk, VA and two brothers, Lee Hively of Knoxville, TN and Julian Hively of Weirton also survive Also preceding him in death were six brothers, Clyde, Glenn, Carl, Floyd, Lysle and Keith Hively and two sisters, Uldine Matthews and Mary Adams. Styrl was a Veteran of the United States Navy during WWII where he served on a battle ship in the Mediterranean Sea. He worked at T & W Supply in the 1950’s then moved to Harrisonburg, VA and worked for Harrisonburg Fruit and Produce. In the 1960’s, he moved back to Pocahontas County to care for his parents and retired from Coca Cola in Marlinton, WV. He was a member of the Jehovah’s Witnesses Kingdom Hall. Styrl’s request for cremation will be honored and a memorial service will be held at a later date. Memorial contributions may be made to Jehovah’s Witnesses Kingdom Hall, 124 Toby Road, Elkins, WV 26241 or the Randolph County Humane Society, PO Box 785, Elkins, W 26241 in memory of Mr. Hively The Tomblyn Funeral Home of Elkins is in charge of the arrangements for Styrl Wesley Hively. Condolences may be expressed to the family at www.tomblynfuneralhome.com.

The family of Styrl Wesley Hively created this Life Tributes page to make it easy to share your memories.