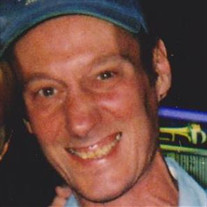 Terry Alan Cain, age 61 years, a resident of Elkins, passed away Saturday morning, October 1, 2016 in the Hospice Care Unit at Ruby Memorial Hospital. He was born July 24, 1955 in Elkins a son of Robert E. Cain and Evangeline Clingerman Cain who reside in Elkins. Also surviving are two brothers, Rocky Cain and wife Lori of Georgetown, DE and Jeff Cain and wife Jennifer of Marietta, OH. Three sisters, Kathryn Holmes and husband John, Woodbridge, VA, Julia Woody and husband Steve, Elkins and Candy Cain of Elkins. Many nieces and nephews also survive. Also preceding him in death were his Paternal Grandparents, Virgie and Clyde Keller and Maternal Grandparents, Robert and Carrie Clingerman. Terry was a graduate of Elkins High School with the Class of 1973. He attended Fairmont State College where he majored in Graphic Arts. He was a social member of H.W. Daniels Post 29 American Legion and Tygart Valley Post 3647 Veterans of Foreign Wars. He was employed in construction for years, and at the time of his illness, he was a salesman at Trickett Hardware. He was a hard worker who was well respected by his colleagues for his skills, abilities and dedication to ensuring the highest quality of work. Terry had a great love of reading and enjoyed working crossword puzzles. He was an extremely talented artist and an excellent cook. He loved the outdoors and was an avid walker. He was a dedicated WVU Mountaineer and Pittsburgh Pirates Fan. He truly enjoyed the simple things in life. Terry had a very kind heart, a loving family and many friends who appreciated him for his loyalty, honesty and his sense of humor. Terry was a Christian by Faith. His request for cremation has been fulfilled. A celebration of Terrys’ life will be announced at a later date. Memorial contributions may be made to the Mary Babb Randolph Cancer Office of Philanthropy, PO Box 9300, Morgantown, WV 26506-9300, Davis Medical Cancer Care Center, 801 Harrison Ave., Elkins, WV 26241 or spread “Random Acts of Kindness” by paying it forward. The Tomblyn Funeral Home of Elkins is in charge of the arrangements for Terry Alan Cain. Condolences may be expressed to the family at www.tomblynfuneralhome.com.

The family of Terry Alan Cain created this Life Tributes page to make it easy to share your memories.