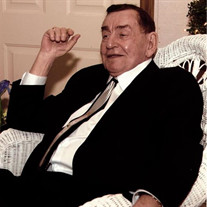 Mr. Thomas Robert Eidell, Sr., age 85 years, a resident of Beverly, passed away Saturday, July 13, 2019 in Monongalia General Hospital at Morgantown, WV. He was born May 7, 1934 in Pennsylvania, a son of the late Thomas Franklin and Marie Daisy Eidell. On June 27, 1959 in Elkins, he was married to Carolyn A. Pennington who preceded him in death August 5, 2000. He is survived by three daughters, Linlee Eidell and Norman Carr and Shasta Eidell, all of Elkins and Chalai Clark and husband Bob of Keyser, WV; two sons, Thomas R. “TR” Eidell, Jr. and Daron Eidell and wife Lisa all of Elkins. Seven grandchildren, Thomas R. Eidell, III, Parrish Eidell, Micah Eidell, Bayley Eidell, Kristi Clark, Taylor Clark and Seth Chewning, two great grandchildren, Uriah and Sunny Eidell and several nieces and nephews also survive. Mr. Eidell was a Veteran of the United States Army serving with the 79th Division of the U.S. Army Field Artillery and a graduate of Davis and Elkins College. He was a well-known businessman in Elkins for many years as owner of Nella’s, Inc. and Nellas’s Nursing Home, Inc. and administrator of Nella’s, Inc. He was a member of the New Beginnings Ministry in Buckhannon. A private service was held and interment followed in the Maplewood Cemetery. A gathering of family and friends will take place from 2:00 pm until 5:00 pm Saturday, September 14, 2019 in the Randolph Room of the Isaac Jackson Hotel, 830 Harrison Avenue, Elkins, WV. Memorial contributions may be made to the Randolph County Humane Society, PO Box 285, Elkins, WV 26241, to the New Beginnings Ministry, 201 Old Elkins Road, Buckhannon, WV 26201 or to a charity of choice in memory of Mr. Eidell. The Tomblyn Funeral Home of Elkins is in charge of the arrangements for Mr. Thomas Robert Eidell, Sr. Condolences may be expressed to the family at www.tomblynfuneralhome.com.

Mr. Thomas Robert Eidell, Sr., age 85 years, a resident of Beverly, passed away Saturday, July 13, 2019 in Monongalia General Hospital at Morgantown, WV. He was born May 7, 1934 in Pennsylvania, a son of the late Thomas Franklin and Marie Daisy... View Obituary & Service Information

The family of Thomas Robert Eidell Sr. created this Life Tributes page to make it easy to share your memories.