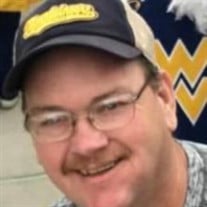 Tracy Dale Patrick passed away on St. Patrick’s Day, Wednesday, March 17, 2021 which was his favorite holiday. He would tell all that was his day. God called Tracy home after a long and brave battle with cancer. He was born August 14, 1967, a son of Deloris Sue Evans Patrick who survives in Elkins and the late Charles E. Patrick. He leaves behind his loving wife, Nancy Regester Patrick whom he married, May 23, 1998 in Elkins; mother-in-law, Betty Regester of Elkins, and his step-children, daughter, Wendy Peppers and husband Will of Nashville, TN; sons, Willie and David Riddle, of Elkins. Sisters, Arletta Collins and husband Tony of Angers, NC, Tamara Lewis and husband Mark of Elkins; brother, Clifford Patrick and wife Karen of Ceredo, WV. Tracy pride and joy were his six grandchildren, Rori Riddle (baby girl), Addie Riddle, Wyatt Riddle, Charlie Peppers, Jake Riddle and Nathan Beldina and their mothers, Jennifer Riddle and Stephanie Riddle. Left to remember Tracy is his Aunt Minnie Hutchinson and cousin, Dennis and Timmy Hutchinson whom he had a special relationship and many other cousins, nieces and nephews. Also preceded him in death were his step-son, Sean Paul Riddle; brothers, Charles “Chuck” and James “Butch” Patrick; maternal grandparents Toka and William Hatfield; grandfather Harold Evans; paternal grandparents Martha and Clifford Patrick and his very best friend for many years, Howard Nebe whom he respected very much. Howard’s wife Loretta and her brother Barry were a big part of Tracy’s life. Tracy enjoyed his Cleveland Indians and WVU Mountaineers. He loved going to the quiet of his friend Scott’s farm, watching sports with friends, Dave and Brenda who he also enjoyed many adventures with, and his beach buddies, Mitch and Denise. Tracy served his country as a United States Marine and was proud of everyone who served. He had worked for AT&T as a Director of Sales prior to his retirement. He was a member of the Tygart Valley Post 3647 Veteran of Foreign Wars. A private service for family and close friends will be held at which time presentation of the American Flag will be made by members of the Leland D. Crawford Detachment 956 Marine Corps.League. Tracy’s request for cremation will then be honored and a celebration of life will be held at a later date. Memorial contributions may be made to Davis Medical Center Cancer Care Center, 801 Gorman Ave., Elkins, WV 26241 in memory of Tracy. The Tomblyn Funeral Home of Elkins is in charge of the arrangements for Tracy Dale Patrick. Condolences may be expressed to the family at www.tomblynfuneralhome.com.

Tracy Dale Patrick passed away on St. Patrick&#8217;s Day, Wednesday, March 17, 2021 which was his favorite holiday. He would tell all that was his day. God called Tracy home after a long and brave battle with cancer. He was born August 14,... View Obituary & Service Information

The family of Tracy Dale Patrick created this Life Tributes page to make it easy to share your memories.