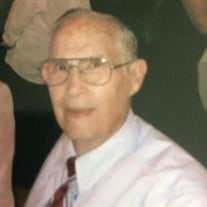 Wayne Lloyd Teter, 91 years of age, passed away on May 1, 2018, at Colonial Place, Elkins, WV. He was born September 19, 1926, in Elkins, WV, the son of the late Glenn and Florence Kisamore Teter. He was preceded in death by his loving wife of 50 years, I. Marie Day Teter, in 1997, his sisters Velma Cooper, Beula Powell, Hazel Marie Teter, Rheba J. Teter, and brother Glenn Teter, Jr. He is survived by the following: Jo Ellen Currence Teter, his wife of 20 years. Four children - Thomas Teter (Josie) of Clermont, FL; Edward Teter (Linda) of South Charleston, WV; Peggy Moore (Albert) Summerville, PA; and Patty Cover (Don) of Bridgeport, WV. Stepson – David Pratt and Stepdaughter - Jeanette Pratt Wolfe both of Moorefield. Seven grandchildren – Jolynn Geer (Brad); Travis Teter (Jenny); Casey Moore (Katie); Stacey Whanger (Jason); Emily Huffman (Ryan); Tiffany Overholser (Sean); and Kimberly Cover. Fourteen great grandchildren – Hunter, Harley and Hannah Geer; Elliott Teter; Jace Moore and Alexis Love; Kassidy and Kenna Whanger; Josiah Teter, Samuel and Elijah Huffman; and Peyton, Toby and Paislee Overholser. Wayne started going to the Church of the Nazarene in the spring of 1943 while dating his girlfriend Marie Day who became his wife on September 25, 1946. He was an active member of the Church of the Nazarene and served on the Church Board, ushered, served as the Sunday School Treasurer for 35 years, and received the Second Mile Award. Wayne graduated from Elkins High School (class of 1944) and enjoyed monthly breakfasts with local classmate graduates for many years. He always remained a fan of the Tigers, be it the Elkins Tigers or the Detroit Tigers. He loved watching baseball and kept up with all the records and stats. Wayne worked at the Minute Market which later became Harrold’s Key Market for 30 ½ years and then for the Crystal Key Market for 1 ½ years. He then went to work for the WV Department of Highways Weight Enforcement for 16 years and retired on December 31, 1988. He was in the first graduating class for Weight Enforcement officers at the WV State Police Academy in July 1982. He ran the Weigh Station at Crystal Springs until his retirement. Wayne was a member of the Randolph County Senior Center. He enjoyed going to the YMCA beginning in 1989 for a senior exercise class in the pool 3 times per week and enjoyed the good fellowship that he found there. He said that was one reason that kept him going. In 2008, Wayne was privileged to see his granddaughter; Kimberly Cover crowned Queen Silvia of the Mountain State Forest Festival. Wayne was a prayer warrior and prayed for his entire family, by name, each night. Wayne loved his family and attended the wedding of every child and grandchild and had many framed photographs of the weddings displayed in his home. He treated all of his children’s spouses as if they were his very own children. He loved all his grandchildren and great grandchildren and made an effort to travel and see each of them and hold them. He also showed great affection for Tyler Hamrick who was part of his Nazarene Church family. All the words that could be used to describe Wayne, including, but not limited to, thoughtful, supportive, dependable, a man of integrity, encouraging, loving, full of kindness, and faithful, are words that display his true worth and highest qualities that were thoroughly appreciated by his family. Friends may call from 6:00 pm until 8:00 pm Friday, May 4, 2018 at the Tomblyn Funeral Home in Elkins. A funeral service will be held at 10:00 am Saturday, May 5th from the funeral home chapel with Pastor Terry Burgess and Pastor Terry Cannon officiating. Interment will follow in the Elkins Memorial Gardens on the Country Club Road. The Tomblyn Funeral Home of Elkins is in charge of the arrangements for Wayne Lloyd Teter. Condolences may be expressed to the family at www.tomblynfuneralhome.com.

Wayne Lloyd Teter, 91 years of age, passed away on May 1, 2018, at Colonial Place, Elkins, WV. He was born September 19, 1926, in Elkins, WV, the son of the late Glenn and Florence Kisamore Teter. He was preceded in death by his loving wife... View Obituary & Service Information

The family of Wayne Lloyd Teter created this Life Tributes page to make it easy to share your memories.