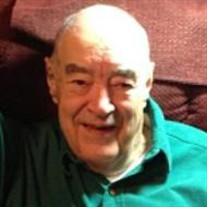 Mr. William Arnold “Bill” Phillips, a resident of the Chenoweth Creek Community, passed away peacefully in his sleep on Thursday, March 29, 2018, at the age of 87. Bill had been in declining health for several years, but retained his quiet strength and sense of humor until his passing. He was born July 15, 1930 in Elkins, the first born of nine children to Chester and Creta Phillips. On March 1, 1957, he was united in marriage to Glenna Jane (Hedrick) Phillips, who survives. They had just celebrated 61 years of marriage. In addition to his wife, he is also survived by his daughters, Tamala J. Gainer and Sherri L. Shafer and son-in-law Richard of Florence, KY, as well as six grandchildren: Seth Gainer of Washington, DC; Nathan Gainer and wife Chera of Milton, WV; Taira Gainer Landavere and husband Austin of Elkins, WV; Keane Shafer, Caden Shafer, and Hanna Shafer of Florence, KY; and one great-grandchild, Railyn Gainer of Milton, WV. He is also survived by his brothers Calvin Phillips and wife Shirley of Barboursville, WV; Kenneth Phillips and wife Sheila of Elkins, WV; and his sisters Anna Ruth Stalnaker and husband Paul of Buckhannon, WV; Wilma Miller and husband Robert of Elkins, WV; and several nieces and nephews. He is preceded in death by one son, David Lee, and son-in-law, Philip N. Gainer as well as his brothers Dorman Phillips, Boyd Phillips and Allen Phillips and one sister Clara Phillips. Bill graduated from Elkins High school in 1950, going on to serve in the U.S. Air Force for three years with the B-29 Combat Crew during the Korean War. He returned home to attend Baltimore Technical Institute, where he received a degree in Television Servicing. He spent 36 years at the Kelly Foundry before retiring in 1994. Bill was also an excellent craftsman and repairman, constructing and flying remote-controlled model aircraft, building several musical instruments for his grandchildren, and being able to fix just about anything. He was an avid reader and loved to tell his children, grandchildren, and anyone who would listen of the history of aviation in the 20th Century, including World War II combat, Claire Chenault, and the disappearance of Amelia Earhart, and many other topics. Bill believed that bluegrass was the only real music and spent nearly every Wednesday night at Pickin’ in the Park at Elkins City Park watching his brother Boyd play fiddle. He received his pilot’s license in 1982 and was a lifelong member of the Elkins Pilots Club. He was also a member of the American Legion, VFW, and the Disabled American Veterans. Mr. Phillips’ request for cremation was honored. A graveside memorial service and interment in the American Legion’s Little Arlington Cemetery will be held for family and friends at 2:00 pm on Sunday, April 8, 2018. Full military honors will be accorded at the gravesite by members of the United States Air Force, H.W Daniels Post 29 American Legion and Tygart Valley Post 3647 Veterans of Foreign Wars. Memorial contributions may be made to Mountain Hospice, 1600 Crim Avenue, Belington, WV 26250 in memory of Mr. Phillips. The Tomblyn Funeral Home of Elkins is in charge of the arrangements for Mr. William Arnold “Bill” Phillips. Condolences may be expressed to the family at www.tomblynfuneralhome.com.

Mr. William Arnold &#8220;Bill&#8221; Phillips, a resident of the Chenoweth Creek Community, passed away peacefully in his sleep on Thursday, March 29, 2018, at the age of 87. Bill had been in declining health for several years, but retained... View Obituary & Service Information

The family of William Arnold "Bill" Phillips created this Life Tributes page to make it easy to share your memories.

Mr. William Arnold “Bill” Phillips, a resident of the Chenoweth...