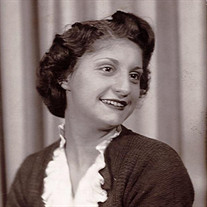 Wilma Waybright Bodkins, age 95 years, a former resident of Elkins and more recently a resident of Wilmington, NC, passed away Sunday, June 20, 2021 in the Lower Cape Fear LifeCare and Services in Wilmington, NC. She was born January 20, 1926 in Randolph County, a daughter of the late Willie Nathan and Hassie Blanche Wimer Gatewood. She was twice married. First to Robert Waybright who preceded her in death on June 30, 2004 and later to Leslie Bodkins who preceded her in death on December 30, 2010. Surviving is one son, Bennett Glen Waybright and wife Amy of Taneytown, MD and two daughters, Sharon Ann Spencer, Wilmington, NC and Cindy Lynn Blair and husband Jim of Cochiti Lake NM. Six grandchildren, seven great grandchildren and three great-great grandchild also survive. Also preceding her in death was one son, Robert Daniel Waybright; one brother, Dewitt Clinton Gatewood and five sisters, Virginia Dillworth, Martha Pasco, Mary Lee Lambert, Bonnie Lou Hockenbury and Emily Elizabeth Gatewoood. Mrs. Bodkins attended the schools of Randolph County and was a “Rosie the Riveter at the Glen L. Martin Plant in Baltimore, MD in the 1940’s. She was a Homemaker and attended the Trinity United Methodist Church in Wilmington, NC. She was a quilter, square dancer and enjoyed hiking. Friends may call from 1:00 pm until 2:00 pm Saturday, June 26, 2021 at the Tomblyn Funeral Home in Elkins. A funeral service will be held at 2:00 pm Saturday from the funeral home chapel with Pastor Julie Davis officiating. Interment will follow in the Mountain State Memorial Gardens near Gilman. Memorial contributions may be made to the Trinity United Methodist Church, 1403 Market St, Wilmington, NC 28401 in memory of Mrs. Bodkins. The Tomblyn Funeral Home of Elkins is in charge of the arrangements for Wilma Waybright Bodkins. Condolences may be expressed to the family at www.tomblynfuneralhome.com.

The family of Wilma Waybright Bodkins created this Life Tributes page to make it easy to share your memories.