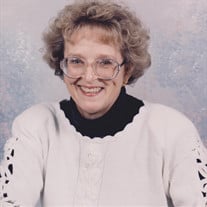 Wilma M. Kerns, age 90 years, a resident of Elkins, passed away at 1:45 A.M. Sunday, August 28, 2016 at her residence. She was born July 29, 1926 at Elkins, a daughter of the late Earl and Ruth Weese Moore. She was thrice married. On October 3, 1945, she was married to E Dice Harper II, who preceded her in death. June 19, 1972, she was married to Robert G. Hintz, who preceded her in death and on June 12, 1988, she was married to James L. Kerns, who also preceded her in death. Surviving are two sons, E. Dice Harper III and wife Judy of Laurel, MD, William Glen Harper and wife Elaine of Godwin, NC and two daughters, Randy C Harper of Elkins and Pamela Gail Varner and husband Richard of Elkins. One sister, Wilda Godwin of Buckhannon, nine grandchildren, ten great grandchildren and nine great- great grandchildren also survive. Also preceding her in death were two sisters, Anna Wees and Eva Gail Dean. Mrs. Kerns was a 1945 graduate of Elkins High School. She was employed as a secretary for many years for Dr. Donald Roberts and for the Parrack Insurance Agency until her retirement. A graveside service will be held at 11:00 AM Tuesday, August 30, 2016 at the Mountain State Memorial Gardens near Elkins with Pastor Mark Epperson officiating. Interment will follow. In lieu of flowers, the family ask donations be made to Hospice Care Corporation, PO Box 760, Arthurdale, WV 26520 in memory of Mrs. Kerns. The Tomblyn Funeral Home of Elkins is in charge of the arrangements for Wilma M. Kerns. Condolences may be expressed to the family at www.tomblynfuneralhome.com.

The family of Wilma M Kerns created this Life Tributes page to make it easy to share your memories.